John Jay is a first year residence hall. It also contains the John Jay Dining Hall, the offices of Health Services, and JJ's Place, a basement snack bar. The building is located at the corner of 114th Street and Amsterdam Avenue, with its entrance on the campus side. It is named for Founding Father and alumnus John Jay. Not, therefore, to be pronounced Juan Jé or John Jizzle. 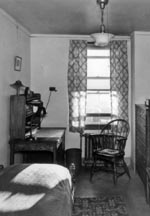 John Jay Hall was one of the last McKim, Mead, and White creations, built in 1927. It was not the first John Jay Hall. Between 1919 and 1920, Columbia had purchased a group of four apartment buildings on Claremont Avenue (Nos. 21, 29, 35, and 39), one of which was named John Jay Hall and used for housing Barnard College students. The present John Jay Hall was called "Students Hall" until 1925, when the "John Jay" name was transferred to it, and the Claremont Avenue building, which had been converted to staff housing in the meantime, was re-christened Charles King Hall.

The new John Jay was designed in part to serve as a "grand university commons." More than just a residence hall, the building also included a dining facility, space for student activities, and an infirmary. The mezzanine of John Jay, its putative Fourth Floor became the first true home of student activities on campus, long before Ferris Booth and Alfred Lerner Halls[1] Even the Columbia Spectator had offices there. The space gave its name to the Fourth Floor Cabinet, an informal committee of student activity leaders who advocated to the administration on behalf of their organizations. The name stuck even after the organizations moved into Ferris Booth. Vestiges of the old fourth floor can still be seen from the building's lobby - look up and you'll notice bannister railings for a mezzanine balcony, but which has been drywalled up to form Health Services. When John Jay opened, the infirmary was originally located up on the 14th floor.

Students often wonder why John Jay Hall, exclusively freshman housing, would consist of all singles, when singles are the exception, rather than the rule, at any other university. The answer is that Columbia's priorities up until the 1990s were heavily tilted in favor of its graduate and professional schools. Like its companion dormitory, Wien Hall, John Jay wasn't to house just undergraduates, to say nothing of first-years. One student at the School of Engineering in 1947 distinctively remembers living on John Jay 11. He also remembers a place in the basement of John Jay, then the Lion's Den, now JJ's Place, that served some wonderful fried chicken (and beer!) that one could get at any hour of the night. He also remembers uncooperative elevators (because the elevator operators went on strike). Some things never change.

But most do. The twentieth century witnessed an epic struggle between Columbia College and the graduate and professional faculties for control of John Jay Hall. As late as 1965, Columbia College winning yet another floor from the graduate and professional schools (one of which was SEAS), was enough to make front-page news in the Spectator. By the 1980s and 1990s, as Columbia was beginning to refocus on its undergraduate education, the battle was finally over as the South Field dormitories were set aside for first-year housing.

Seen from a distance, John Jay Hall—like many tall McKim, Meade and White structures-- is austere to the point of plainness, so tall and broad that it is forbidding. Only a copper crown, weathered green like the copper covering the Statue of Liberty, gives it any visual interest.

Enter the quad between John Jay and Hamilton Hall, however, and one’s experience changes. You discover that John Jay, walling off the outside world, has carved a surprisingly quiet, private space out of the City. Its arms thrust forward to seal out not only the City’s noise but also any distracting buildings built in jarring styles that would have been seen over a smaller building’s shoulder. Walking towards John Jay from Hamilton, everything one can see on all sides is MM&W Renaissance or Classical.

This space one walks though is as richly ornamented as John Jay’s upper stories are plain.

When one enters the building-- for the modern audience, at least-- there is a shock of recognition.As one student blogger joyfully wrote a year or two ago, “I recognized it immediately: Hogwarts!” In a Spec article from February 2009, before going on to bash the food in the dining hall, an angry gourmet did admit, “when I learned that John Jay’s interior looked like Hogwarts, reality was not strong enough to make me think that Columbia was anything other than paradise on earth.”

The set directors of the Harry Potter movies, when they created Harry’s school, were after the same mixture of history, tradition, and comfort as McKim, Meade and White were when they created the opulent public spaces on John Jay’s main floor. The grand dining hall, carved all of wood a century ago, with richly paneled walls and a coffered ceiling, is a classic, as are the posh sitting rooms and reception areas, with their giant fireplaces and Hogwarts-like pictures of vanished royalty. (Though the pictures don’t talk.)

The New York Times immediately dubbed John Jay "the Skyscraper Dorm." To understand what McKim, Meade and White intended by raising the fifteen story, block-long colossus upstairs, one has to live in the rooms (as this author did for four years.) Then it becomes clear that John Jay is all about the views, and using them to enlarge the rooms. The architects had seen that this site would afford, looking north, Low Library set in one of the most beautiful campus views in America; and looking south, dramatic views of Cathedral bell towers, Manhattan rooftops, distant skyscrapers and their lights at night—great New York City “sense of place.” Above the eighth floor, as the sun’s arc sinks towards the horizon in December, the sun pours almost horizontally into Jay’s windows, crossing left to right but never leaving.

The higher floors are compensated for the elevator ride. Truly “unique,” as Housing puts it, are the topmost rooms on the Fifteenth Floor, under the copper crown. Something of a tourist attraction, the Fifteenth Floor cannot even be reached by the ancient elevators. One has to get off at Fourteen and climb the rest of the way by stairs (which, during Move-In, traditionally acquire a sign reading, “To the Penthouse”) up to a series of rooms, larger than the rooms on floors below, whose ceilings curve in interesting ways echoing the copper crown right above them. From the windows of these “penthouse” rooms, up in the air and the sun, one gets helicopter views of the buildings and streets far below.

Artists from Federico Garcia Lorca to Jack Kerouac have exclaimed over the views McKim, Meade and White created from their Columbia dorms. Photographs of the rooms themselves show only the room itself, a simple, narrow, almost monastic cell. The experience of living in that room is quite different, because all the space outside the window, beside the student’s desk, becomes part of the room. Mentally, one lives outside the room, looking down on the City. Like Spiderman.

However, John Erskine, the guy behind Lit-Hum was not a big fan of John Jay. In his novel Bachelor of Arts, he wrote of the dorm:

[He] had never as yet seen a jail, but he suspected that his narrow cubicle, and the still narrower bed, the wash-stand, the undersize desk, the one chair, and the inadequate clothes closet, were what you would get in Sing Sing, if you weren't violent. The length of the dormitory corridor bore out this prison impression—except that from the dormitory the inmates departed early in the day and returned only under the compulsion of nature to sleep.

John Jay features a large ground floor student lounge that serves host to numerous student events throughout the year. It's also where Room Selection takes place each spring, and the Yule Log Ceremony each winter.

The Lounge also features three large oil paintings (John Jay? Some English Monarch?) and a bust of the building's namesake, John Jay, donated by the College Class of 1943. If you look carefully, you will notice the absence of the labeling plate under one of John Jay's portraits. This is because Jay's dates were originally given incorrectly, as a student astutely observed several years after it was put up. In typical Columbia fashion, the problem was blamed on the alumni who had who donated the painting and never really fixed. [4]

The focal design feature of the lounge is the massive fireplace, presented on Commencement Day 1926 by the Classes of 1881 of the College, School of Mines, and Graduate School of Political Science. Above the fireplace, inscribed in large gold letters is the motto "HOLD FAST TO THE SPIRIT OF YOUTH LET YEARS TO COME DO WHAT THEY MAY." The inscription was composed by William Waldemar Share of the School of Mines, and then-president of the Society of the Early Eighties.[5]

Lower floors avoid the misery of the notorious John Jay elevators, which after nearly 85 years of complaints remain mysteriously low on the University’s “to do” list. The British Empire crumbled; the Soviet Union, the Third Reich, Mao’s China, rose and fell; the John Jay elevators remain the same. They have karma. Someday, they will reveal their true purpose here and Who they are waiting to carry. Or—less fancifully-- is the slowness of the elevators simply the fault of that desecrated Indian graveyard directly beneath them?

Residents of John Jay 5 (the lowest floor with residents) are legendary for their refusal to take the stairs, even though this only exacerbates the elevator problem.

In November 2007, residents of John Jay 6 ordered t-shirts with the words "I TAKE THE ELEVATOR" screen-printed on the front.

The staircase that runs from the lobby to the basement is very interesting, featuring nice brickwork and a fancy wooden sign that contrasts with the usual bland white wall, carpet, and fluorescent lighting everywhere else. This staircase is probably entered no more than once a week as everyone uses the elevator instead. Most John Jay residents don't know of its existence.

Incidents in the building

Get down to the basement by using the stairs or elevators. Do not enter the basement by means of JJ's, the doors are alarmed. The tunnels leads north up a ramp. Hartley lies beyond, but Hamilton is locked off. There are no alarms or cameras other than the ones on the JJ's doors. This tunnel is legal, but it is dirty and foul-smelling.

This tunnel is blocked semi-permanently. To even see it from the John Jay side is extremely risky, as it is located at the back of the JJ's storeroom, which has cameras at the entrance. The door itself is hot-glued and welded shut. Better visit the Butler side which is much easier to get to. If you want to get to the connection of the John Jay side, you also have to sneak into the storeroom, which is hard because the JJ's people are pretty much always there.

At one point they were used to transport food from John Jay Dining Hall to the Lion's Den cafeteria in Ferris Booth Hall.

The roof is the slanted copper style, so you can't stand on it, except for a small section near the edge of the roof, if you have a friend on the 15th floor. However, you are six inches away from a 160 ft drop; it's not worth it. In any case, the access hatch is easily located on the roof of the fifteenth floor, but good luck opening it without anyone noticing. If you want a good view of the campus from a roof, try Mudd Hall, Pupin Hall, or Butler Library.