From WikiCU
(Redirected from South Field)
Jump to: navigation, search 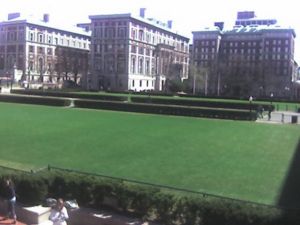 Overview of the lawns from Ferris Booth Commons. Photo from The Bwog

South Lawn refers to the two fields between Butler Library and College Walk. One gets to South Lawn from College Walk by descending the Rives Memorial Steps.

Access to the fields is signaled by flags posted at the corner of the field. Green flags signal an open field, red signal closed. Sadly, the fields are almost always closed (or one of them is closed), as indicated by the red flags. In the winter, they're usually concealed (along with the other lawns) by white tarps to protect them from the elements, so you can't even see them. They used to do this to make sure the grass looked good for Commencement, when the lawns are instead covered in sea of folding chairs. Recently, facilities has stopped putting chairs on the grass itself, instead first laying down interlocking boards to create an artificial "floor" that covers (and kills) all the grass. Honestly, you can't make this stuff up.

Luckily for you, Butler Plaza, the fairly lengthy strip of green between the two lawns is unrestricted, and Facilities allegedly maintains an up-to-date Lawn Status website.

To be fair, the restrictions are probably there so that the fields can handle the abuse of Commencement without resulting in the complete destruction of the fields, which would necessitate costly re-sodding of the entire field. In fact, in the early 80s, the east lawn had been turned into a useless tract of compacted dust, and Columbia had to pay for the field to be torn up, new soil brought in, and the grass replanted.

According to a legend popular among campus tour guides used to disseminating apocryphal (at best) stories, royalties from the film Ghostbusters pays for the lawns' ongoing maintenance. Alumni from the era of filming have suggested that in reality, location fees from the filming financed the aforementioned rehabilitation of one of the lawns.[1]

In terms of historical campus geography, the term South Field referred to the empty land across 116th Street from Low Plaza down to 114th Street. Realizing that a) there wasn't enough space on the original campus footprint (116th Street to 120th Street) for the buildings that Columbia needed, and b) that the open vista that Charles McKim had envisioned Low Plaza opening onto had been filled up with newly constructed row-houses, the trustees decided to snap up the remaining land south of campus. They ended up paying $2 million for the two blocks south of 116th street, as much as they had paid for the four blocks north of it only 5 years before, and in order to finance the purchase, they had to sell off a block of the Upper Estate (the future site of Rockefeller Center).

In addition to serving as the site new buildings, like Hamilton Hall, and the Hartley and Wallach (then known as Livingston) dormitory buildings, South Field did in fact boast a "Field" for a number of years. The current lawns once formed a contiguous strip of grass upon which football matches and other sporting events were held. A football field was set up in the fall, and Lou Gerhig played baseball here in the springs. This came to an end with the acquisition/construction of Baker Field.