Butler Library is Columbia's main library for undergraduate study and graduate research. It is named for longtime University President Nicholas Murray Butler, and holds 2 million volumes in the humanities. Butler has study rooms open 24 hours a day during the school year. Students in Butler tend to either work or spend time on Boredatbutler.com. Among its many facilities, Butler has a Blue Java outlet, a lounge (often used by students working on group assignments), and several computer labs.

Construction on Butler was begun in 1931 and the dedication ceremony was held in 1934. It was built in response to a space crunch at Low Library, which after 30 years had become too small to hold Columbia's growing collection. Discussions for a new library began in 1927 when the university librarian addressed a 13 page letter to President Butler proposing to build a new library by connecting Low Library to University Hall. When that proved unfeasible, James Gamble Rogers (the favored architect of donor Edward S. Harkness) was asked to execute a design for the 114th street border of the campus instead. The building was originally named South Hall, before being named in honor of Butler. It is said that there was a move to name the library after Columbia's 10th president, Frederick A. P. Barnard, but Butler put the kibosh on the idea, leaving the building strategically unnamed until his own retirement. This probably worked out well in the end: Columbia's main library being named "Barnard" would have only caused the Columbia-Barnard relationship to be more confusing than it already is.

Names on the facade

One of the more recognizable features of Butler Library's exterior is the list of names that wrap around the building. A common misconception is that the names represent authors featured in the Core Curriculum. The names were in fact hand-picked by President Nicholas Murray Butler when the building was designed[1], before there was much of a core curriculum. Besides, college students weren't even allowed in Butler for many years, which was geared to serve the research efforts of graduate students and faculty members. Of the 18 names engraved though, only Demosthenes has never been required reading in the history of the Core.

Read from the Homer all the way around to Goethe, the names are roughly in chronological order.

In addition to the 18 prominent wrap-around names, each of the main windows on the campus side of the building except for the center three have two names inscribed underneath them. The three middle windows have a version of the university seal underneath them.

The names have been the subject of protest for much the same reason that students often protest the Core Curriculum: they are almost exclusively old, dead, white males. In the past, student activists have climbed to the Butler roof and unfurled banners covering the names with those of black or female authors instead.

Butler is also home to the Phillip L. Milstein Family College Library which is the official designation for the 24-hour reading rooms and the collection of books stored within on the 2nd, 3rd, and 4th floors of the library. Since Milstein isn't really distinguishable from Butler itself in any major fashion, no one actually uses the term "Milstein," and most probably don't even know that it "exists". After 11pm, when the other rooms of the library close, graduate students come down from other floors and overcrowd the 24-hour reading rooms.

Books in the Milstein Library are organized by the first two letters in their call numbers:

Hours are the same as the circulation desk, meaning these reading rooms close!

Hours are the same as the circulation desk, meaning these reading rooms close! 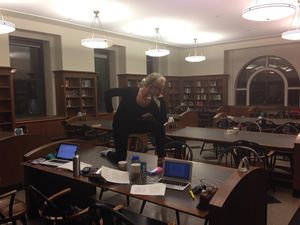 A student up so late in Butler 409 that she posed for a photo and deliriously posted it on Reddit [3]. 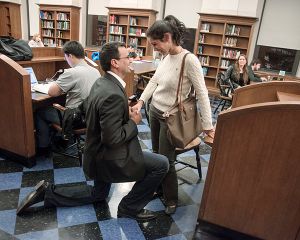 While Butler Sex has yet to be documented, there's at least one known instance of a wedding proposal taking place in Butler - due to the fact that the couple met there.[4]

Camping out in Butler

During midterms and finals many people camp out in Butler. They take up valuable desk space and seats, leaving their books, laptops and other possessions in the library for extended periods. Some people even leave their belongings in the library 24 hours per day, usually to reserve the very best library real estate. A very small number of people literally camp out in Butler, sleeping there. This behavior can get all the crazier at Columbia because, unlike other university libraries, Butler is open 24/7, regardless of whether finals are taking place.

Many students believe that people who leave their belongings in Butler for extended periods are making unfair use of the library. As a remedy, objecting students believe that unattended belongings should be confiscated at regular intervals by library staff. The belongings would naturally be made available somewhere else in the library for students to claim. Alternatively, CCSC and the other class councils could do something useful for students by organizing a "Butler Clearance Task Force".

Go down to the bottom of the X staircase (NW corner of Butler). It is a large basement which is mostly empty but has storage rooms. It is well lit and all-white. Frequent Benoit tags here. There are no cameras or alarms here, but there is a security gate in the staircase. It is trivial to open. Bring a screwdriver or the tunneler's friend, the swiss army knife. Beware constant staff intrusions during the daytime since the first floor of the stacks is used for book storage and the 'B' level of the non-stack area is frequented by maintenance workers. There is nevertheless a light security risk and a half-hearted security attempt.

Note that there is a tag for vecular@yahoo.com in the basement, an email that has been spotted in about 3 places. The email address is non-responsive, but doesn't bounce back.

The machine room in the southwest corner of the building is fun. You can get out into an exhaust plenum which has vents opening to the outdoors. Some are large enough to climb through. You'll find yourself under a set of grates which are part of the sidewalk on the 114th street side of Butler.

Go down to the basement, and go to the southwest corner. You will see the padlocked double doors. These are normally inaccessible, but as of 6/06, the double doors are unlocked, so the passage between Butler and Carman/Lerner is wide open.

Go to the east edge of the basement. You will see a locked door with sharpie markings on it, possibly welded/hot glued shut. It leads into part of the JJ's store room.

The John Jay/Butler/Carman tunnels were once used to transport food from John Jay Dining Hall to the Lion's Den cafeteria in Ferris Booth Hall.

Alumni of Columbia College get access to Butler for life. There's a nominal fee, but they'll give you a functioning Columbia ID that you can use to con your way into student discounts. The IDs last for a ridiculously long time before they have to be renewed though (something like 15 years), so you may not want to try this con on someone who sees a CUID regularly. Oh, and it'll get you into Butler. Just don't think you'll be able to check anything out.