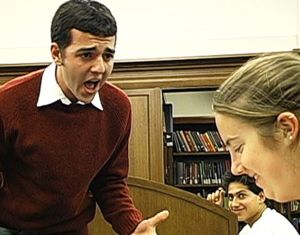 Prangstgrüp was a group of students that staged pranks or performances, recording videos of them, between around 2001 and 2005. The group is now inactive, but its videos have become famous on YouTube and College Humor.

Juli Weiner defined the group's "larger ideological commitment" as "something like: college still counts if you have fun"[1].

The Chronicle of Higher Education called its video "REACH" "arguably the best college prank on YouTube"[2][3].

This prank is set in a library. A guy turns on his Powerbook. The standard startup noise crescendoes into an entire symphony, and goes on, and on, and on. Most students look on aghast or startled. Others try to continue studying as if nothing is happening. Someone comes to the Powerbook student's aide, but no one protests. Eventually, the noise comes to an end, and everyone returns to their business.

A professor is lecturing to sleepy students in 309 Havemeyer. A young man (Mike Barry) stands up and interjects, "Reach!" Music starts playing, and the young man sings a song about how professors need to inspire their students. As the song continues, three other students (Kate Berthold, Patrick Young, Trey McArver) stand up and sing. They come together in the center of the classroom for the finale, before swiftly disappearing afterwards, leaving the professor and students astounded.

Unquestionably Prangstgrüp's greatest feat consisted in populating much of an NYU campus tour with annoying, stereotypical characters and taping the reaction of the other prospective students, tourists, and tour guide[4][5].

The video was so notorious that NYU has scoured the web for it and removed any and all trace[6]; in the face of this frankly obsessive-compulsive NYU PR drive, periodic resurrections of the video have always been, sadly, very brief. Fortunately, right now, both Bwog and IvyGate are hosting it on their respective Vimeo and Youtube channels [7][8].

Recently, Harvard students attempted their own version of the tour prank, taping fake tours they gave on the Yale campus.[9] The result was rather less successful.