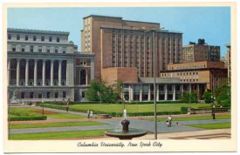 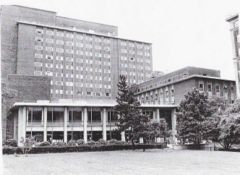 The predecessor to Alfred Lerner Hall, Ferris Booth Hall (known among students simply as FBH, or in the 90s as FBiatch) boasted magnificent campus views, a grand entry hall staircase, Wollman Auditorium (site of dances, receptions, amateur theatrics, etc.), a full-service commercial kitchen with extensive walk-in refrigeration facilities, broadcast studios for WKCR radio, a music and entertainment space known as "The Lion's Den," a six-lane bowling alley, a fifty-foot smallbore rifle range, billiards room, the facilities of the Student Beer & Wine service (staffed by the Student Bartending Service, and supplying beverage services within FBH, and at many other events across campus), and, in the Hewitt Lounge, an open-sided fireplace. Completed in 1960[1] from a design by Shreve, Lamb & Harmon Associates (better known as the architects of the Empire State Building among other NYC landmarks), it was razed in 1996.

Prior to its construction, various locations around campus served the function of student center, most notably the second floor of John Jay Hall, a space now occupied by Health Services.

Lerner Hall has none of these amenities. Instead, it has ramps and lots of big windows, which has lead to it commonly being compared to a rather generic airport terminal.

Ferris Booth Commons, a dining facility in Lerner, commemorates the former building. A plaque on the walkway outside the glass wall of Lerner also memorializes the old building.

One of Ferris Booth's most notable features was that it was almost entirely student-run, in contrast to the maddeningly student-unfriendly Lerner Hall UEM bureaucracy. The use and operation of the building was coordinated by a large (~50 students) board known as the Board of Managers or BOM.

University President Eisenhower first proposed, but never seriously pursued, creating a "Citizenship Center" where students would develop "a greater sense of obligation and responsibility to the community". The "Citizenship Center" would be partially staffed by military officers. The goal of creating a student life centered around civic engagement was later partially fulfilled by the Citizenship Council, founded by Steven Weinberg. The mission of Columbia's student centers since then has backed off from the second half of Eisenhower's plan, but still tries to uphold the first half, as exemplified in the Double Discovery Center.

Contemporary reporting suggests that FBH was held in similar contempt by its users as present-day students hold Lerner Hall. In 1979, only 20 years after its construction, a group of college alumni undertook a drive to raise $200,000, to be matched by a $100,000 allocation by the administration, in order "to change Ferris Booth Hall (FBH) from an underutilized, poorly maintained building to an effective student activities center." Students called the building "sterile", "pathetic" and its contribution to student life "nonexistent." [2]