From WikiCU
(Redirected from Lerner Hall)
Jump to: navigation, search 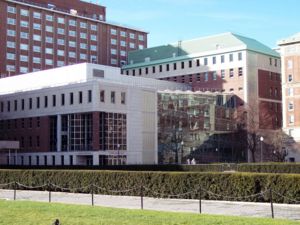 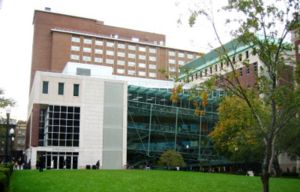 Alfred Lerner Hall, with Carman rising in the background

Alfred Lerner Hall is the student center. It was built from 1996-1999, replacing Ferris Booth Hall, and is named for donor Alfred Lerner CC'55.

Lerner is notorious for its infuriating system of space-wasting and inefficient upward-spiralling ramps. The stairs in the 'exit' stairwells are actually the quickest way to navigate Lerner. 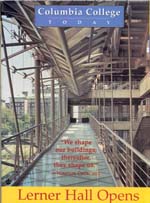 A 1999 issue of CCT heralds the opening of Lerner Hall

Lerner Hall came into existence when students began finding that Ferris Booth Hall didn't offer them enough space for their activities. As George Rupp had made investing in undergraduate resources a priority, the administration pursued a major gift as part of its ongoing capital campaign. With a $25 million donation in hand, the administation called in then-GSAPP dean Bernard Tschumi to choose an architect to design a new building. Tschumi's choice? Bernard Tschumi.

The design has been widely criticized for its slanted ramp structures, which are an inefficient means of moving about within the building and take up vital space - the very extra space that had been lacking in Ferris Booth. Tschumi and others justified the ramps as a social space that were supposed to respond and function just like the Low Steps. They don't.

After several years in which student groups had been exiled to a corrugated shack outside John Jay Hall, Lerner Hall opened. The administration wasted no time beginning a propaganda drive, distributing free T-shirts and other goodies with "CU on the Ramps" written on them. These were somehow supposed to encourage disinterested students to congregate on the ramps. They didn't.

Since, at least one student has proposed (successfully) on the ramps.[1]

In later years, Lerner has been the focus of a tug-o-war between students and administration over the use of rooms. Spaces like the Satow Room and the Roone Arledge Auditorium are frequently taken up by admin meetings and conferences, exiling students to dorm rooms and classrooms. Lerner's empty sixth floor has become a particular bone of contention. After years of wrangling, during which the space was nearly converted into a temporary fitness center, among other uses, it was announced that the space would become...administrative offices. In 2009, the 6th floor was opened as the new office of the Dean of Students, as well as the Office of Judicial Affairs & Community Standards and the Office of Financial Aid. The space on the 4th floor vacated by the Financial Aid office is being renovated to create the Center for Student Advising.[2]

Despite such contention, the ramps have come to be a place for students to study as well as a place for organizations to advertise. Beware on weekdays if you are heading to Ferris Booth for lunch or a snack! There will be people selling baked goods. They will approach you. They will yell at you, no matter how uncomfortable you look. Avoid their gaze and make a run for it.

Lerner Hall's approximately $85 million price tag was only partially covered by donors, who raised $35 million for the center ($25 million from Alfred Lerner, $6 million from Roone Arledge, and over $1 million each from the Booth and Satow families). Barnes & Noble and Dining Services contributed $6 million to build out their spaces. The $44 million balance was covered by 24-year bonds at 6 percent interest. The debt is being repaid through a combination of student life fees on all university students (25%), a tax on every school other than Barnard (30%), and the university central administration's budget.[3]

Since Lerner's opening, a number spaces have been reprogrammed after the rooms either outlasted their initial purpose or were found not serve them at all. These included a game room that was converted in the Broadway Room when no one used it, an outpost of STA Travel on the first floor that's been converted into computer kiosks, a Dark Room for film development on the 5th floor that was converted into a computer publishing station[4], student group offices on the 5th floor that were converted into space for SDA and open area for meetings (that were later partially swallowed for more Student Affairs related offices) when the offices turned out to be too small to be useful, and a Credit Union teller's room that was never used, also on the fifth floor.

The piano lounge's name comes from the giant grand piano located next to the entrance. Because people are welcome to play, the lounge can sometimes be a noisy place to study. If you want peace and quiet, you could head up to some of the seating littered around the building, or down to the seating outside the Party Space entrance. Also try the Satow Room on the 5th floor, and the ramp lounges on the 2nd floor.

Note: Building hours are extended to 24 hours during final exam periods. The computer lab on the second floor (campus level) remains open 24 hours at all times, though requires swipe.