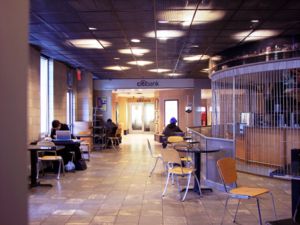 Cafe 212 was a dining location in Lerner Hall. Its name was pronounced "two-one-two", not "two-twelve" as first-years insisted on calling it for their first few weeks. It was named "two-one-two" to match the New York City area code of the same numbering. Cafe 212 served made-to-order sandwiches, wraps, and salads as well as soup and pastries.

Until 2003, Cafe 212 featured booths, which were then replaced with the movable tables and chairs now visible. The effect was to relieve some of the cramped-ness of the space while adding additional seats.[1]

In 2016, the space shared by Cafe 212 and Cafe East was renovated, with much of the space taken by 212 handed over to Cafe East. After the renovation, the intention was for 212 to serve reduced fare, essentially only Coffee and pastries. Instead, 212 was replaced by another location of Blue Java