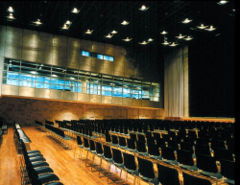 When the divider between the balcony and auditorium was installed, little consideration for sound leakage was made. As a result, the cinema and auditorium floor cannot host two different loud events simultaneously.

Performance groups have previously complained that the auditorium floor and stage have no incline. Orchesis drew attention to this when they titled their 2000 show "Zero Degrees." Since then, CCSC president Matthew Harrison established a fund to allow student groups to have risers installed in the auditorium for performances.

The auditorium has a full stage, theatrical sound, theatrical lighting, a projector, and 112 Ethernet and phone connections. It has a Broadway entrance with a foyer and coat-check room.

Roone was the site of the Minuteman stage-rush in October 2006.

It is named for sportscaster Roone Arledge.