From WikiCU
(Redirected from Minuteman stage-rush)
Jump to: navigation, search 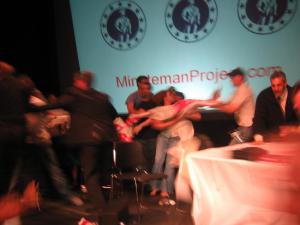 The fight on stage during the Minutemen appearance

The Minutemen stage-rush was a controversial incident that took place on October 4, 2006, when a group of student protesters stormed the stage on which a vigilante border patrol group had been invited to speak, igniting a debate over the limits of free speech and to what extent Columbia was packed with political radicals. It was also the first major news event on campus to be documented in close to real time by blog, earning Bwog fame and credibility.

In October 2006, Chris Kulawik, head of the College Republicans, invited Jim Gilchrist, co-founder and president of the Minuteman Project (a vigilante group that leads armed patrols of the US-Mexico border) to give a lecture in Lerner Hall's Roone Arledge Auditorium. Marvin Stewart, Minuteman's Director of Community Affairs, was supposed to introduce Gilchrist but instead went on a nearly 50 minute long "free-associative rant, ranging through scripture and America’s [Constitutional] Republican form of government" during which the crowd became increasingly agitated and hostile. Gilchrist's time at the podium lasted barely a few minutes before students with a banner climbed onto the stage, prematurely ending the night. During the struggle between the activists and Gilchrist's guards, tables and podiums were knocked over and punches were thrown.

New York magazine also covered the incident, running a glossy spread on what it claimed was a renewed activist culture at Columbia, including massive, unflatteringly high definition headshots of all the protagonists involved, many of which are now featured on these individuals' WikiCU pages for your viewing pleasure[2].

While O'Reilly's name-calling was extreme, the national coverage of the story reinforced Columbia's image as a left-wing institution.

The incident was a watershed moment for The Bwog, for which Lydia DePillis in particular provided rapid-fire coverage (and subsequently wrote an eleven page feature on the incident in the magazine. The incident thus did for Bwog, and for the campus blog as a medium, what the Gulf War did for cable news and CNN—making it an unmissable source of campus news, since Columbians began to realize that it could respond to events more rapidly than Spec. Spec subsequently scrambled to create competitive blogs of its own, taking years before hitting upon a successful format with Spectrum.

Five months after the event, the University charged 7 students involved in the incident for simple violations of the University Code of Conduct. 3 were issued censures, while 4 received disciplinary warnings[3].

The following video was recorded by CTV and widely circulated after the incident: