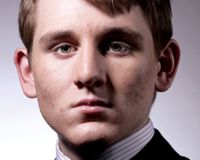 Kulawik appears on Fox News, where he was a frequent commentator on Columbia affairs

He first rose to prominence as president of C4, and later became the rabble-rousing head of the College Republicans: he helped bring controversial former Attorney General John Ashcroft and the immigration vigilante Minutemen group to campus. The latter event prompted the Minuteman stage-rush incident. In another provocative move, he initiated the Republicans' global warming beach party.

Kulawik's penchant for eye-catching stunts has gained him notoriety. In an interview with the New York Times he referred to himself as the "most hated person on campus".[1] He also debated then-Blue and White editor Avi Zenilman on the Bill O'Reilly show, claiming he felt unsafe on campus after the Minuteman stage-rush incident[2]. This was only further evidence that Kulawik enjoys a high profile and likes to raise it by fueling the flame.

Kulawik also wrote a column called "Chris Shrugged" for the Columbia Spectator.[3] The title was a reference to Ayn Rand's novel Atlas Shrugged. During his first year of writing the column, he would often write columns to provoke campus leftists, for example calling for the renaming of the Malcolm X Lounge. Later, however, he seems to have moderated his rhetoric somewhat.

After graduation, Kulawik attended law school at Harvard. He is a first year associate at the New York law firm Quinn Emanuel[4].