From WikiCU
(Redirected from Columbia Spectator)
Jump to: navigation, search 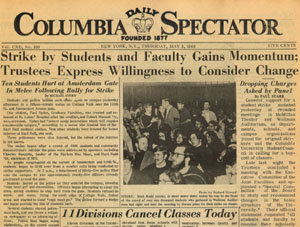 Spec front page during the 1968 protests 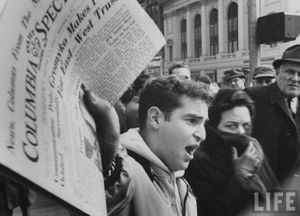 Copies of the Spectator being sold during the newspaper strike of 1962-1963.

The Columbia Daily Spectator is the weekly newspaper of the university community and Morningside Heights. It is written by undergraduate students and operated out of the Spectator office at 120th Street and Clarement Avenue, inside the Riverside Church property. The paper is referred to simply as "Spec." The paper is printed in broadsheet format every Thursday during the academic term. 5,000 copies are printed and delivered to over 150 locations throughout Morningside Heights, and they are read by God knows how many people.[1]

Spec is currently run by the 144th managing board. Membership of the current and past boards is listed here: Managing Board of the Columbia Daily Spectator.

Trainees at Columbia Daily Spectator begin their time at the paper with a 1- to 2-month training period, during which they learn the basic roles and responsibilities of their department. Journalism trainees publish their first articles, while Business & Innovation trainees take on an impactful project. When their department editors/managers sees fit, they become staff writers/associates. Each November and December, students run for positions at the paper, a grueling process that takes nearly a month. They begin by "shadowing," or sitting with the current editors or associate editors and learning the editing process. Next, they write proposals for their desired position. The students then take an editing test made up by their department editor that tests them on the fundamentals of editing. Finally, they go through the "Turkey Shoot," an interview in which the current managing board grills the applicant on why he feels he would be a good fit for the position. The results of the application process, including the new managing board are announced in mid-December, the weekend before finals.

Spec was founded in 1877 by William Barclay Parsons and someone else. It is the second-oldest continually operating college news daily in the nation, after The Harvard Crimson. It has been financially independent of the university since 1962. However, between 1964 and 1970, it received subsidies from the university of up to $20,000.[2] In addition, to this day, "in return for the free circulation, the University provides office and production space to the organization."[3] Spec paid $130 for occupancy expenses in 2007.[4]

On December 6, 1972, The Spec announced that it would fold unless it received financial assistance. The Spec, despite being in massive debt at the time, had spent $25,000 on a new typesetting machine. Spec wanted Columbia to give them a $25,000 loan, but Columbia said no, because the Spec still owed them $16,000 for a telephone bill.[5]. On December 17, the Spec and Columbia kissed and made up, the Spec got their $25,000 loan, Columbia got free printing services for five years, and the Spec got more time to squeeze $16,000 from their alumni.[6]

Previously printed in tabloid format, in September 2004 the Spec started printing in broadsheet form. The editors at the time somehow thought they deserved to "move up" in the newspaper world, taking their place next to slightly more distinguished papers like the New York Times. This move was distinctly against the grain; a large and increasing number of newspapers around the world are moving or have already moved to tabloid format, which is more popular especially with readers in cities.

Some students at Columbia agree that broadsheet newspapers are inconvenient and would like to see Spec return to tabloid format. Tabloid sized papers are conveniently hidden in notebooks if you're inclined to read in class. Other students believe that broadsheet format adds a dab of prestige to the Spec brand and allows it to stand up to its Ivy League peers. Nowadays, few people care because who still reads newspapers in print?

The Spectator is also available on the web. In recent years, the online staff has changed the organization of the website on an almost annual basis, and as a result, certain hyperlinks to the site are broken. In 2010, the Spectator launched Spectrum [1], a blog updated several times per day with news, arts, sports, and opinion posts. Spectrum follows several misadventures in blogging for the Spectator, but appears to be a relative success.

In April 2014, the Spectator Corporate Board moved to end daily production of its print edition. In face of declining print revenue and the supposed inevitability of cutting print production a new model was proposed: the paper would move to a weekly print edition and beef up its website. A majority of the paper's trustees approved.

Spec's road to producing a successful blog was long and arduous. In February 2006, the paper launched a series of blogs, aptly named SpecBlogs. These blogs soon became defunct. Another blogging effort, launched in October 2006 to cover the 2006 midterm elections, proved more successful. In December of 2007, the newspaper launched yet another blog, this time specific to the Opinion page, called "The Steps". Those blogs are now also defunct. However, SpecBlogs.com was subsequently revived again, with a repertoire that included Commentariat (the new opinion blog), Spectacle (for arts and entertainment), and The Editors Notes. These blogs were phased out upon the creation of the omnibus Spec blog Spectrum (see below).

Spec's short-lived attempts at producing successful blogs were frequently mocked by the initially much more successful Bwog as the "Splogs".

A recurring blog on Spec's website during housing lottery season, since 2007, has been the housing blog The Shaft, which survived the carnage of Spec's other early blogging efforts, and is now incorporated as part of Spectrum.

Under the tenure of the 134th Managing Board, the Spec has made a renewed effort at the Spectator blog. Rebranded as "Spectrum", a revamped daily blog was launched in March of 2010. The current Spectrum editor is Hannah Josi.

In September 2006, Spectator staff launched The Eye, a weekly magazine featuring investigative pieces and commentary on Columbia and NYC. The goal of starting The Eye was to provide a platform much of the feature writing that Speccies did for The Blue and White in addition to topics that had no previous coverage. The name of The Eye relates both to the fact that one "spectates" with it and urban theorist Jane Jacobs' notion that "eyes on the street" help keep neighborhoods safe.

As of 2015, The Eye is no longer in print after the rest of the paper switched to weekly print in fall 2014.