Riverside Church was built by Rockefeller. It is on Riverside Drive at about 120th St, near Grant's Tomb. 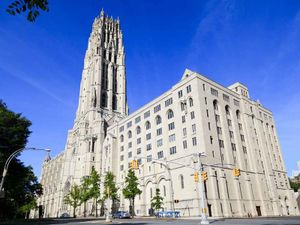 The church's steeple is the tallest structure in Morningside Heights. It may soon be surpassed by 100 Claremont Avenue.

Martin Luther King and other Civil Rights Movement leaders once spoke there.

Riverside and Columbia share an amiable working relationship. It used to be the site of SIPA's graduation ceremonies. In 2017, the Columbia Spectator moved from its former office at 112th and Broadway, and is now headquartered in some of the church's office space.