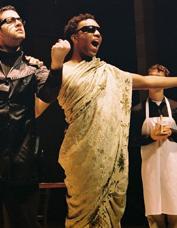 Homer stops by the Varsity Show

Homer is the name given to whoever, or whatever, wrote down former Greek oral poems the Iliad, Odyssey, and others, including the Hymn to Demeter, which form the first three books read by Columbia College freshmen in Lit Hum.

As they will be told in the introductory lecture to the course, Homer may have not been named Homer, may have been a woman, or may have been several people. No one really knows anything about him/her/them, except that he/she/they wrote. A lot. Also, he/she/they are/were probably from what is now Turkey, and not modern Greece.

Along with Columbia freshmen, his/her/their poetry is now enjoyed by millions in the form of NBC miniseries and sword and sandal epics starring Hollywood heartthrobs.