From WikiCU
(Redirected from Lit Hum)
Jump to: navigation, search 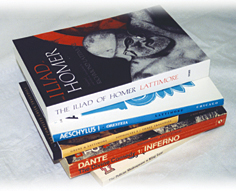 The course is a central part of the Core Curriculum and is taken by all Columbia College first years. The first semester covers mainly Greek literature, with some Bible-stuff at the end. The second semester starts with Virgil and ends with Virginia Woolf. For your convenience, we have prepared a "lite" guide to the course (see below). That said, you probably won't get most of it until you've actually done the reading.

Although the experience of receiving one's free copy of Iliad, a gift from the Columbia College Alumni Association, and meeting one's freshman classmates in the first Lit Hum class is marketed as one of the central experiences of an education at Columbia College, Lit Hum historically played poor cousin to its Core Curriculum counterpart in philosophy and politics, Contemporary Civilization. While the latter course began under its current name as early as 1919, Lit Hum developed out of a series of later course concepts.

The first was John Erskine's General Honors course, first proposed in 1917, but not meeting for the first time until 1921. This was the first expression of that educator's philosophy that students should engage in reading the "Great Books" of Western Civilization. This course was later co-taught by Mortimer Adler and Mark Van Doren. Van Doren went on to create General Honors' successor, Humanities A, which he himself taught for 17 years. Adler would go on to become a popularizer of the Great Books movement, taking the Gospel of the Core to some school in the Second City. During the 1930s, another class, the Colloquium on Important Books, co-taught by Jacques Barzun and Lionel Trilling, would embrace the Great Books philosophy and help shape modern Lit Hum.

Although the Lit Hum syllabus is among the most ironclad in all the Core Curriculum, parts are subject to change and modification due to instructor discretion, grad student strikes, and other unforseen circumstances. In Fall 2006, for example, the standard first semester syllabus, normally all Greek and Biblical texts, was altered to include a modern play by Vaclav Havel, who was on campus at the time as artist in residence. Still, modifications are often minor - a different Greek play substituted for the Medea, an additional Shakespeare play, another Homeric poem, etc. Such changes can mean that one becomes lost when your friend from another section begins discussing an anomalous inclusion, like The Baccahe, but the majority of the curriculum is fairly standard. A greater schism may open with a much older alumnus of Columbia College, who might remember a time when Milton, Voltaire, and/or Goethe appeared on the syllabus. The following table is intended to include all works in current use (either this year or in the past two or three years):