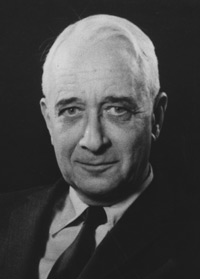 With only brief interruptions, he spent almost his entire postcollegiate career at Columbia. His dissertation, which took him eleven years to write, was on Matthew Arnold. In 1939, Trilling was the first Jewish professor in the English Department to obtain tenure. He was elevated to a full professorship in 1948. In 1965, he received the title George Edward Woodberry Professor of Literature and Criticism.

Among other achievements, Trilling was instrumental in the development of the Core. With Jacques Barzun, he co-taught a precursor to Core classes known as the Colloquium on Important Books, and was later a frequent instructor in the proto-Lit Hum class known as Humanities A.

Older alumni, many of whom came to Columbia to "take Trilling," look back on his presence fondly. Trilling was a mentor, for example, to a young Norman Podhoretz. Also among his students were Jack Kerouac, Allen Ginsberg, John Hollander, and Louis Menand.

Although a prominent liberal (he authored The Liberal Imagination), Trilling was criticized later in life for not being able to understand or connect with the youth movements that engendered cataclysms such as the 1968 protests.

In 2008, scholars unearthed an unfinished novel of Trilling's in the Columbia archives.