Ginsberg attended Columbia on a scholarship from the Young Men's Hebrew Association of Paterson, NJ, originally intending to eventually study law in pursuit of a public interest career.[1] In 1945, he joined the Merchant Marine to earn money to continue his education.

He was recognized as a literary talent early on by luminaries like Lionel Trilling and Mark Van Doren, who helped the young Ginsberg out of several scrapes with the administration, and with whom he kept in touch after graduation.[2] While at Columbia he edited the Columbia Review, wrote for Jester and was president of the Philolexian Society. He was also winner of the Woodberry Poetry Prize and, reportedly, a Philolexian Prize as well.

He was suspended for a year after writing the graffiti "Butler has no balls" (referring to University President Nicholas Murray Butler) in the grime of his dorm room window in Hartley Hall - though he assumed, at the time, that his suspension had to do with letting Jack Kerouac sleep in his room, which was against school rules. Ginsberg had actually written the phrase to enrage his maid, whom he'd suspected of neglecting his room and being anti-Semitic[3]

In summer 1948, he went to the old Columbia Bookstore location in Journalism Hall where he had a vision of people in masks, "hiding their universal consciousnesses". Scholars have said that this event inspired all his subsequent poetry.[4] 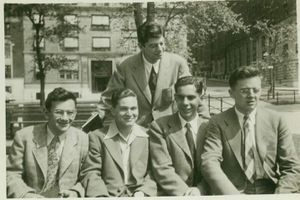