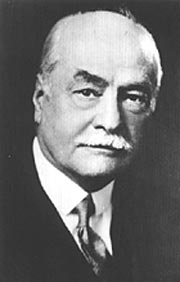 Nicholas Murray Butler CC 1882 MA 1883 PhD 1884 was the ruler of Columbia for over four decades (1902-1945). Despite being associated with several controversies, and banishing, brushing aside, or ignoring opponents with the effectiveness of his similarly mustachioed contemporary, Stalin, he was probably Columbia's most influential leader. And his influence over the direction of the university began well before even his long term as president, as he can claim credit for aiding the expansion that took place under Presidents Frederick A. P. Barnard and Seth Low as well. As the Spec wrote after his death: "When 16 year old Nicholas Murray Butler came to Columbia, it was a small, unpretentious college of 227 students. When 83-year-old Nicholas Murray Butler retired from the presidency of Columbia University, he left a gigantic institution with an enrollment over 23,000."[1]

Butler's achievements extended well outside the university's gates; he won a Nobel Peace Prize and was a candidate for Vice President of the United States, served as head of the Carnegie Endowment for International Peace and had his Christmas greeting to the nation published every year in the New York Times. In his prime, he was better known outside the U.S. than the country's presidents, and would be the only individual at international conferences who wasn't a head of government or state. Despite his prolific achievements and notoriety, the FBI has no documents about him, since "[r]ecords which may have been responsive [..] were destroyed on December 7, 2009[2].

Butler Library, the Butler Medal, and Butler Hall are named after him.

Butler studied philosophy during his time at the college, and graduated valedictorian (or maybe salutatorian, since sources differ - we would not be surprised if he was actually both). He initially considered law school, but then-College President Barnard warned him away from the law, dismissing it as something "anyone could do". After graduate study, he took a brief jaunt through Europe, where he was intrigued by German research universities, which he would later use as a model. His academic brilliance led Theodore Roosevelt to dub him "Nicholas Miraculous."

While a student at Columbia, Butler was also a member of Psi Upsilon and the Peithologian Society, and edited the Acta Columbiana and The Columbiad (a parody article he inserted into its pages of the yearbook caused it to be "suppressed"). During this time, he was also found time to write for the New York Tribune and to teach at two private schools.

Butler's mental prowess didn't necessarily translate into other fields. He failed to make it onto the crew or football teams, perhaps presaging his temporary banishment of the latter as University President. However, he did play on what must have been a short-lived Columbia cricket team for two years.

Butler joined the faculty as a philosophy professor in 1885. Once on the faculty, Butler threw himself into administration. In his later years, Butler would somewhat self-servingly claim that when Columbia was poised to move to the Morningside Heights campus, he had advocated the entire neighborhood be purchased for the new campus. Whether or not true, Columbia's failure to purchase all of the land being sold by the Bloomingdale Insane Asylum has arguably contributed to space issues to this day.

Butler also helped found, in 1887, the New York Institute for the Training of Teachers, which later evolved into Teachers College, and served as president of that institution until 1901. He could not quite help reaching into other spheres of influence, either; by the age of 30, he had been involved in a reorganization of New Jersey's schools and libraries, and had weathered a libel suit for calling the New York City school system "a mastodon".

In 1890, Butler's colleagues elected him the first Dean of the Faculty of Philosophy (the second of Columbia's three graduate arts and sciences faculties), from which perch he recruited a number of prominent academics to Columbia, including James McKeen Cattell, E. B. Wilson, and Franz Boas.

All this activity earned Butler the attention of many American universities. No fewer than eight state schools, as well as Stanford, had offered him presidencies that would have paid over three times his professorial salary, but he held out to helm Columbia, perhaps because he had been promised the president's post after the departure of Seth Low.

As University President, Butler was highly influential in creating the Columbia University we know today. Despite his obvious ambition to become Vice President or President of the United States, he clung tenaciously to his university title, retiring only when he went blind and was close to death.

Butler was responsible for the acquisition of South Field, stating firmly that "the area of the [original Morningside Heights campus] site... will be entirely insufficient for the work of the University in the very near future". His tenure saw the construction of many buildings, including all of those that now stand below 116th Street (save Carman and Alfred Lerner Halls), as well as new science buildings such as Mudd, and Pupin.

He also single-handedly blocked the construction of a Riverside Park stadium by banning football (due to its "rowdiness") and by placing a low priority on undergraduate student life. Later, he helped acquire Baker Field, which you can either interpret as a remedial gesture to grant Columbia necessary space for athletics or an attempt to remove sports as far as possible from Morningside Heights.

Support for graduate vs. undergraduate education

Inspired by German research universities, Butler heavily de-emphasized undergraduate education in favor of graduate study, establishing centers of graduate learning, such as the Medical Center, and seeking to exclude the College from representation on the University Senate. Deriding the college's liberal arts curriculum as producing "wastefully educated men," he later infamously proposed that a two year preprofessional course be adopted as an alternative to College study; this was actually implemented, but was later discontinued.

In seeking to sideline the college, Butler antagonized more than a few of its prominent faculty members. Professor John Erskine, for example, proposed the college even move to a separate campus, near Baker Field, in order to reestablish its independence.

Beyond favoring formal graduate education, Butler was also instrumental in expanding the university beyond even its degree-granting functions, creating such programs as Columbia's summer sessions, its extension school, and its University Press.

Necessarily a star fundraiser, given the size of his ambitions, Butler also set the pattern for administrators that's all too familiar today: ignoring the needs of current students while courting wealthy alumni heavily.

From 1905 to 1915, Butler banned the sport of football at Columbia, judging it to be too "rowdy". The team still hasn't made up for the lack of practice to this day.

A number of professors who spoke out against American participation in the First World War were stifled by Butler. Indignant, several of them, including luminaries such as John Dewey and Charles Beard, left the university and founded the New School.

Butler was a staunch supporter of Benito Mussolini (leading to the establishment of Casa Italiana), and fascism in general. Soon after the establishment of the Nazi regime in Germany in 1933 he invited the Nazi ambassador to the United States, Hans Luther, to speak at Columbia. In doing so, he ignored vigorous student protests, dismissing them as "illiberal", and stated that Luther was an "emissary from a friendly people".

In 1936, Butler again courted controversy by sending a representative to the 550th anniversary celebration of the University of Heidelberg, in Nazi Germany. In response, an angry crowd surrounded the President's House, shouting "castigate (and, later, castrate) Butler!"

Butler later reconsidered his support for fascism and vehemently supported the US war effort.

During his regime, Butler made sure that Columbia had a very strict Jewish quota. Butler established Seth Low Junior College, meant to provide parallel education to lower-income Jews (and other urban immigrant groups), in a lame attempt to pacify his critics.

In addition, only two Jews served on the Board of Trustees during Butler's reign: Benjamin Cardozo from 1928 to 1932, and Arthur Hays Sulzberger, starting in 1944. He respected some Jews, the sparkling example being the awarding of tenureship to Lionel Trilling in the English Department, and provocatively sent a Jew as his representative to the Heidelberg anniversary festivities, but these were more like exceptions to the rule.

Interference in the Pulitzer Prize

In 1941, the Pulitzer Prize committee at the Journalism School was poised to select Ernest Hemingway's To Whom the Bell Tolls as its fiction winner. Butler found the book "offensive" and objected, imposing his veto as ex-officio head of the prize (which is administered by the university). No book received a prize that year.