From WikiCU
(Redirected from Baker Field)
Jump to: navigation, search 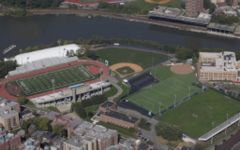 Baker Athletics Complex (previously Baker Field) is Columbia University's 21-acre athletics complex.[1] It is located at Broadway and 218th St in the Inwood neighborhood at the northernmost tip of the island of Manhattan. Prior to the opening of Baker Field, many athletics events were held on South Lawn. There are many athletics facilities are located at Baker Field, including Robert K. Kraft Field at Lawrence A. Wien Stadium, an outdoor track, tennis courts, and rowing facilities.

Baker Field in 1936, with the original wooden Columbia Football Stadium and Baseball Field

Prior to the acquisition of Baker Field, Columbia played field sports at the "Columbia Oval"[2] in Williamsbridge, the Bronx, an even greater distance from campus,[3] or, later, on South Field. Manhattan Field (actually the second incarnation of the Polo Grounds) was also occasionally leased, and sometimes referred to as "Columbia Field". The situation was thus that Columbia had to resort to rotating its sports around the cramped South Field, ship its athletes to the northern Bronx, or shell out money to rent a stadium.

The tract of land on which the Baker Athletics Complex stands was purchased for the University on December 30, 1921 by financier George F. Baker. A gift worth $700,000 at the time, the 26-acre area was dedicated in April, 1922 and was coronated with spring football practice that same year. In the fall, Columbia's football team continued to practice at Baker Field, but played its games at South Field on the Morningside Heights campus. The "Columbia Football Stadium" at Baker Field opened in the fall of 1923 with 15,000 seats in temporary stands. Five years later, the University built the 32,000 wooden-seat stadium that served Columbia fans for 55 years, until the spring of 1983.

On May 17, 1939, Baker Field played host to the first live television broadcast of an athletics event. A Columbia-Princeton baseball game at Robertson Field (called Andy Coakley Field back then) was carried by the National Broadcasting Company to the 400 or so sets then capable of receiving its broadcast signal. Satisfied with the result, NBC decided to try doing a major league game. Five months later it did, from Brooklyn's Ebbets Field.

In 1984, Columbia sold off 5 acres on the northeast corner of the property to Presbyterian Hospital, which constructed the Allen Pavillion, a 300-bed community hospital that opened in 1988.[4][5] In return for the property, Columbia supposedly received 1.5 acres of property across Broadway from Baker, and funding for the west stand, lighting, and artificial turf at the new Wien Stadium, a new track, soccer stadium, and baseball field renovations.[6] Of course, local residents protested, arguing that the sale violated the terms of George Baker's gift, and calling the 'community hospital' a charade.[7]

Lawrence A. Wien Stadium was opened on September 22, 1984 as the Lions fell to Harvard, 35-21. Columbia didn't win its first game at the Stadium until October 8, 1988 when it defeated Princeton, 16-13 to end a Division I record-setting 44-game losing streak.

Lawrence A. Wien Stadium today is home to the Lions' football, lacrosse and track & field teams. The track features an eight-lane Rekortan track.

Around the time when Wien stadium was rededicated as Robert K. Kraft Field at Lawrence A. Wien Stadium, athletics began referring to Baker Field as Baker Athletics Complex, perhaps to better describe the nature of the facility, or maybe just to avoid the awkward 'field at stadium at field' name.

In the course of NYC's 2012 Olympic bid, Baker Field was selected as the site for Field Hockey competition had NYC been selected.[8] Columbia would have benefited through $25 million worth of renovations including an update of Wien Stadium and its adjacent practice field, and an expansion of Chrystie Field House.[9]

The Baker Athletics Complex is composed of the following facilities

Hosted jointly by the student councils for the first home football game of the year since (?), Baker Blast is a popular event.

Typically the first Ivy League home game of the year, Homecoming always draws a large crowd as well as a strong alumni presence to Baker Field. Homecoming in fall of 2003, which coincided with the kick-off of Columbia's 250th anniversary celebrations, holds the record for highest attendance ever at Wien Stadium with a crowd of 13,785[10].