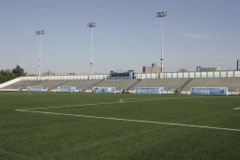 The stadium features a FieldTurf surface as of 2007, the same surface used by professional clubs around the globe, such as FC Barcelona. The installation of the new surface follows a similar update at Wien Stadium in 2005.

Renovations to the field were originally expected to occur after the 2007 season due to a lack of funds. [2]