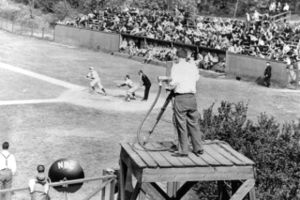 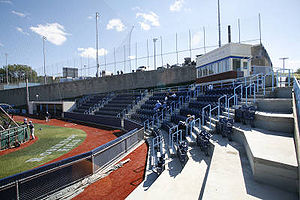 The new seating bowl extending up the first base line.

On May 17, 1939, Robertson Field (called Andy Coakley Field back then) played host to the first live television broadcast of an athletics event. A Columbia-Princeton baseball game was carried by the National Broadcasting Company to the 400 or so sets then capable of receiving its broadcast signal. (Princeton won.) Satisfied with the result, NBC decided to try doing a major league game. Five months later it did, from Brooklyn's Ebbets Field.

Fans universally agree that Robertson Field is one of the most pleasant places to catch a ballgame in New York City. However, baseball administrators have been known to be extraordinarily, even unreasonably, strict on fans' cheers against enemy teams.

In the offseason in 2006-2007, Robertson Field's natural-grass surface with FieldTurf (TM), the same surface as of Lawrence A. Wien Stadium. The infield dirt has also been covered in turf, too; in its place is a brown infield dirt pattern. Consequently, the only actual dirt areas were the pitching mound, a circular cutout around home plate, and the warning track. Given the weather conditions in the Northeast, the new state-of-the-art FieldTurf (TM) surface allows the Columbia baseball team much greater utilization of the baseball venue at all times of the year. Because the new turf surface drains much more quickly and evenly than a clay infield, the venue is less likely to be considered "unplayable" after poor weather in the New York metropolitan area.

Immediately after the change, WKCR sportscasters dubbed the new stadium "Abomination Field". They were censored by the administration in 2009.

During the 2010-2011 offseason, the home plate dirt cutout was replaced by turf as well, making the pitching mound the only dirt-covered area on the field.

Further improvements were made on the baseball field prior to the 2011 stadium, with brand new seats, extended seating down the first base line, and a new home dugout being installed. A new press box is also being constructed; whether WKCR sportscasters will be able to call games straight from the field level is not yet clear. (Previously, they had to call the game from hundreds of feet away in the press box in Lawrence A. Wien Stadium) The improvements were made possible by the donations of Philip M. Satow.

Robertson Field's dimensions are determined by the limitations of its location, in the tradition of the "jewel box" ballparks of early 20th century. Because it is jammed between Wien Stadium and the Hudson River, it has an odd shape. Center field is flush against the river, preventing it from curving out away from home plate as is normal with baseball fields. Consequently, relatively speaking center field very shallow but the power alleys and foul lines are very deep.

Foul territory is virtually nonexistent. Furthermore, the proximity of the field to other structures means almost all seats have some part of the field obstructed from view.

A metal fence has been erected in center field, to prevent cheap home runs. Balls which hit the fence and bounce back onto the field are considered in play.