From WikiCU
(Redirected from Lawrence A. Wien Stadium)
Jump to: navigation, search 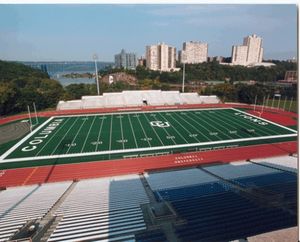 Wien Stadium, from the top of the Columbia fan stands

Opened in 1984, Robert K. Kraft Field at Lawrence A. Wien Stadium replaced the 55 year old wooden-seat stadium that had been built when Baker Field opened. A 17,000-seat facility, it is home to Columbia's football, lacrosse, and track and field teams.

A new artificial playing surface was installed at Wien Stadium in 2005. The Lions now practice and compete on FieldTurf, the same infill system used by many NFL teams.

Beyond the west stands is a panoramic view of Spuyten Duyvil, the confluence of the Harlem and Hudson rivers, and the New Jersey Palisades. The view is one reason that Wien Stadium was featured in Sports Illustrated as one of the most beautiful places in the country to watch a football game.