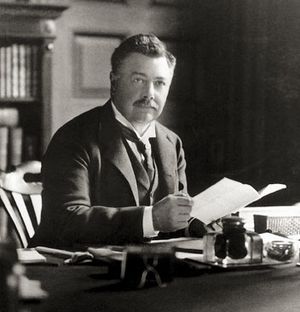 Seth Low CC 1870 was president of Columbia College, then of Columbia University. Oh, and the campus moved from Midtown to Morningside Heights under his watch. Ironically, despite all that, no building on the Morningside Heights campus is named in his honor (Low Library is so named in memory of his father, Abiel Abbott Low.) In fact the only building in the neighborhood honoring him, Seth Low Hall, is a Teachers College housing building.

While the move to Morningside Heights is Low's lasting legacy, equally important was his work to coordinate the activities and faculties of the numerous graduate schools that had been founded under F. A. P. Barnard's watch into a well organized university. His people skills and deft touch earned him the name the "Great Harmonizer."

In 1902, he left Columbia to become mayor of New York City, paving the way for Nicholas Murray Butler to take charge.

At least the Seth Low Professor of History chair is named after him.