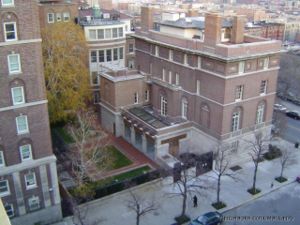 President's House is the official residence for the President of the university, currently occupied by Lee Bollinger. Located at 116th Street and Morningside Drive, its sole purpose is to make students living in nearby Wien Hall (a.k.a. "PrezBo's Projects") feel even more miserable.

During President George Rupp's tenure, it was decided that President's House needed repairs and renovation due to faulty electricity systems. The budget was initially set at $2m. However, the final cost of renovating the structure, completed three years after Lee Bollinger moved in, exceeded $20m.

Following these renovations, President's House now features a dedicated Gigabit network connection, the use of which is unknown.