Wien Hall (not "Wein") is sometimes seen as a decrepit and undesirable residence hall. However, many residents would beg to differ. Also, things have appeared to turn around after renovations.

The juxtaposition of President Bollinger's recently multi-million dollar renovated house directly behind Wien only serves to underscore how awful Wien is as a housing option. It also helps give Wien the nickname "PrezBo's Projects." Slightly more endearing terms include "Fort Awesome", used by Wien-bound residents in denial, and "PrezBo's Guesthouse". Wien residents are sometimes known as Wieners. No kidding. The Bwog often refers to residents as "prisoners" or "inmates".

Wien was once traditionally full of sophomores, but thanks to expanded enrollment and the removal of Furnald from the upper-class lottery, today most singles go to juniors, and only the doubles go to sophomores. 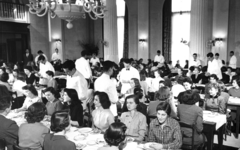 The site of Wien Hall was originally occupied by a building from the Bloomingdale Insane Asylum, but the building was demolished upon the construction of Low Library. The rumor that Wien Hall used to be an insane asylum is therefore false. Wien does indeed resemble an insane asylum with its disheveled appearance, barred windows, personal sinks, large wooden doors, and permanently open vents. However, Buell Hall is the only remaining building from the asylum.

At some point before World War II, the university recognized that the diminutive Hartley, Livingston (now Wallach), and Furnald would not be able to accommodate the student body, which was approaching 17,000. Thus, in 1925, Columbia built Johnson Hall, named for Samuel Johnson, the first President of King's College, and his son William Samuel Johnson, the first President of Columbia College.

Johnson was built along with John Jay as a high-rise to accommodate as many students as possible. Since Johnson was in the far east of the campus, it was designated for female students to distance them from the men, who could be distracted by females. It was built for graduate students because the administration didn't care about undergraduates.

McKim, Mead, and White designed the building, but did not follow the architectural pattern of the main part of the campus. The interior was decorated in the Colonial style, rich with carpets, curtains, and drapes, supposedly to evoke a homely and feminine ambiance, in contrast to John Jay's masculine interior. Like John Jay, Johnson was more than just a dormitory. It housed an infirmary, a student activities center, and the bottom floor was meant to house a refectory (dining hall), but this was never built. Instead, a facility housing several fast food ventures operated out of the space designated for a true dining hall. Several decades later, Columbia revisited the idea of placing a refectory on the ground floor, but historical preservation guidelines strictly forbade any kitchen equipment.

Johnson's most famous female graduate student was Pulitzer Prize winning author Eudora Welty, who spent a year at Columbia Business School in 1930. The residence hall became Columbia's first co-educational dorm when SEAS started to admit women in the 1970s. In 1984, Lawrence A. Wien began a spate of generous giving to Columbia, culminating in the construction of Wien Stadium. Johnson Hall was renamed in his honor.

Following the gut renovations Furnald in 1996 River in 2000-2001, Wien was announced as next in line for the gut renovation treatment, to be followed by Ruggles.[1] To date neither building has received a full renovation. Instead, in 2001, the whole building got new windows and new tile floors. In 2007, facilities finally replaced old room doors whose ventilation grates and complete failure to provide sound insulation were a hallmark of the building and contributed to its asylum-like atmosphere. The fast food court that once occupied the first floor was replaced with offices for Alice! in 2008. In 2020, the first and second floors suffered from the Wienobyl laundry disaster.

Located on the ground floor is a spacious lounge with a grand piano, wooden floors, and several wheeled couches. Since it doesn't require CUID residence hall access, it is a popular rehearsal and concert space for on-campus performance groups. However, groups should be aware that furniture must be requested separately; the number of chairs is quite limited. Plenty of space, plenty of excitement, limited seating.

Alice! is also located on the ground floor.

All rooms in Wien notably have their own sink, which are occasionally used as informal urinals.

The roof can be accessed from the window at the end of the Wien 11 hallway and from the stairway at the end of Wien 12. Visitors to the roof should only come after dark as the guards in the booth at the 116th and Amsterdam gates have a clear sight-line to the Wien roof. Many a Wien resident has been caught on the roof by an eagle-eyed guard. On clear nights, the view on Wien roof is magnificent. It is recommended that one round up a group of people and perform the Primal/Final Scream on the roof together.