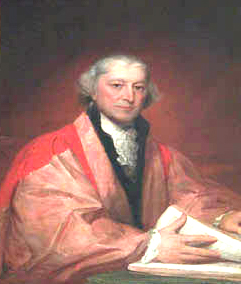 William Samuel Johnson was the first president of the newly-renamed Columbia College, and son of King's College founding president Samuel Johnson. Less importantly, he was a signer of the U.S. Constitution and served as a U.S. Senator representing Connecticut...after staying completely on the sidelines of the Revolutionary War.

Johnson had followed in his father's footsteps, obtaining his education at Yale. He rejected his father's pressure to join the clergy, however, preferring a career in law. Later successful in the profession, he became renowned as a scholar and received honorary degrees from Harvard and Oxford. The latter, along with a residency in London, had prompted Johnson's loyalist, and later Federalist sympathies.

The town of Johnson, Vermont, and its Johnson State College are both named for him.