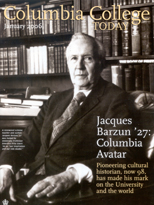 Barzun on the cover of Columbia College Today

Jacques Barzun CC '27 PhD '32 was a cultural historian and was one of the great professors a Columbian could have in the mid-20th century. A distinguished Columbia alumnus, he ascended to the positions of University Professor and Provost over the course of his career. Born in France in 1907, Barzun died in 2012, at the incredible age of 104.

After a very up and down childhood during which his home was an artistic salon ("I had the conviction that everybody in the world was an artist except plumbers or people who delivered groceries," Barzun said of the time) and during which he lost many friends and acquaintances to the First World War (so many of his teachers were at the front, in fact, that Barzun found himself promoted to their position as early as age 9) Barzun migrated to the US. As his New York Times obituary later quoted him saying, "I had read a lot of books about the Indians...I thought that I would come here and see Indians galloping across the plains." Instead, the Times dryly continued, "he went to Columbia."[1]

As an undergraduate, Barzun's intellectual influences included F. J. E. Woodbridge, John Dewey, Mark Van Doren, and Mortimer Adler. But he was also consumed by extracurricular passions. He served as president of Philo, drama critic for Spec, editor of Varsity, a now-defunct literary magazine, and started a tutorial service called "Ghosts Inc." He also wrote the 1928 Varsity Show, Zuleika, or the Sultan Insulted. According to classmates, he would type his Spec theatre reviews while still dressed in black tie and opera gloves. He graduated from Columbia College as valedictorian and Phi Beta Kappa, winning a Philolexian Prize and the Richard H. Fox Prize to boot. 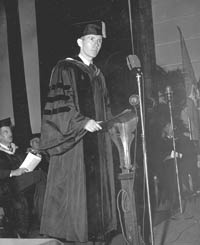 Barzun in academic regalia, 1948. He is known for having changed the color of Columbia's robes to slate grey.

Barzun was immediately made an instructor in the history department upon graduation, and worked as the research assistant of Carlton J.H. Hayes, a historian of nationalism. After completing his PhD dissertation in 1932, entitled "The French Race: Theories of Its Origins and Their Social and Political Implications Prior to the Revolution," which countered the myth that the French aristocracy had emerged from "pure, Germanic" blood, he became a full professor in 1945, earned the Seth Low Professor of History chair in 1960, and became a University Professor in 1967.

He traced periods of rise and fall in the Western saga, and contended that another fall was near — one that could cause “the liquidation of 500 years of civilization.” This time the decline would be caused not by scientism and absolutism, he maintained, but by an internal crisis in the civilization itself, which he believed had come to celebrate nihilism and rebellion.

And yet, in the cycles of history, he believed another renewal would come.

Barzun was also instrumental in the development of the Core, developing in 1932 a proto-Lit Hum class called the Colloquium on Important Books, which he would co-teach with Lionel Trilling. Another popular psuedo-core class they cotaught was titled "Studies in European Intellectual History and Culture Since 1750," familiarly known as "the Barzun-Trilling seminar." From 1946 to 1972 he co-taught, also with Trilling, the extremely popular graduate seminar "Historical Bases of English Literature", which was nearly developed into an interactive CBS television course.

Barzun also served in a number of administrative posts, including Dean of Graduate Faculties and, from 1958 to 1967, Provost.

Columbia's graduation robes were changed from the traditional black to slate blue at Barzun's prompting, the newer color being more comfortable in warm weather, as is typical during Commencement. Barzun called this his "most revolutionary deed".

During the 1968 protests, Barzun condemned both the faculty, for failing in their mission, and the protesters, whom he referred to as "despots". However, this "pox on both your houses" stance led him to be considered an oasis of calm amidst the storm. He continued to reach out to all his students, despite their political sympathies, and insisted his seminars on European Intellectual History continue. When some students refused to cross picket lines to enter the seminar classroom in Philosophy Hall, he offered his spacious office in Low Library instead. During this time, Barzun was said to have instilled in his students the sense that the proper role of the academic was to be detached from political agitation.

Barzun retired in 1975 and currently lives in San Antonio, Texas. He most recently wrote a mammoth 500 year history of the West entitled From Dawn To Decadence.

In 1994 he accepted an Alexander Hamilton Medal on behalf of the teachers of the Core Curriculum. On October 18, 2007, he received the 59th Great Teacher Award of the Society of Columbia Graduates in absentia. In 2011 he was awarded a National Humanities Medal by President Obama.[2]

Barzun entered into a number of interesting marriages. His second wife was a distant cousin of Robert Lowell. His third, whom he married in 1980, a year after his second wife's death and at age 73, was a descendant of an original Jamestown colony settler. He was survived by her, his three children James, Roger (a law school alumnus) and Isabel Barzun; 10 grandchildren; and 8 great-grandchildren.