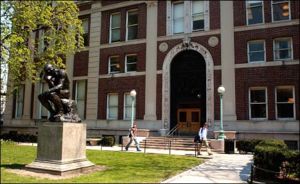 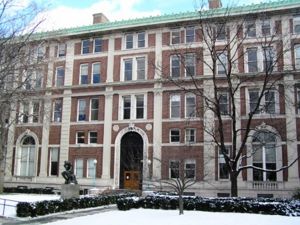 Philosophy Hall (properly Hall of Philosophy) forms the eastern side of the small quad between Buell Hall, St. Paul's Chapel and Kent Hall. Contrary to popular belief, it's not in need of a name donor. Instead, the building was gifted anonymously (though it eventually turned out to be Helen Hartley Jenkins). It was built to house the Faculty of Philosophy, one of Columbia's three original Graduate Faculties.

An authentic bronze cast of Rodin's The Thinker is right outside, although the 15th century Venetian Well Head that now sits in Avery Plaza used to sit here.

The Brander Matthews Dramatic Museum used to be here for a while too.

Edwin Armstrong invented FM radio in room 102. Until the early 1960s, a rifle range was maintained in the basement for Columbia's ROTC programs.

Nowadays you can find the offices of the English Department, the French Department, Student Services, Work Study, and, of course, the Philosophy Department. Edward Said's office was here, and tourists sometimes come by looking for it, leaving offended when they hear it's been reassigned.

It is rumored that a Flat Top cafe is opening in Philosophy Hall in February 2014, where they will serve Blue Bottle Coffee.