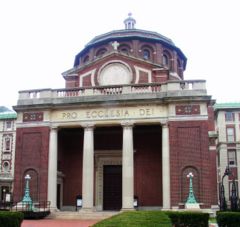 St Paul's Chapel is Columbia's non-denominational religious space. In 1903, two wealthy philanthropists, Olivia Egleston Phelps Stokes and Caroline Phelps Stokes, offered to finance a chapel on the Morningside Heights campus as a memorial to their parents. It was built between 1904 and 1907, and dedicated in 1907. An illuminated letter stipulating the Stokes sisters' gift is framed and hanging from a column to the left of the main aisle and near the entrance. 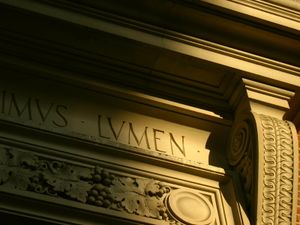 The Stokes sisters’ one condition was that their nephew, I. N. Phelps Stokes, of the architectural firm of Howells & Stokes, design the building. As a result, St. Paul's is one of the few early campus buildings not designed by McKim, Mead, and White. It's also probably the only building with its architect's ashes interred in its walls. A mixture of Italian Renaissance, Byzantine, and, to some extent, Gothic styles, it is referred to in the Eyewitness Guide to New York as "Columbia's most spectacular building".

St. Paul's has a number of interesting architectural features, including a number of inscribed Latin phrases on the exterior. The University motto, In lumine tuo videbimus lumen, is carved above the main door. The larger motto, above the church's front columns, is Pro Ecclesia Dei: "For the Church of God".

Each of the four columns is capped with a carving of a cherub's head executed by Gutzon Borglum, better known as the sculptor of Mount Rushmore.[1]

The two bronze torcheres in front of the building were donated by the Class of 1883 on its 25th anniversary and are the works of Florentine sculptor Arturo Bianchini. The lamp to the left has four statuettes on its base representing prophets of the Old Testament, while that to the right has four apostles of the New Testament.[1]

The inset scallop shells behind the lamps are symbols of welcome, referencing the Shell of Saint James.[1] The torcheres are currently corroding away thanks to a general lack of funding to maintain Columbia's architecture.[2]

Stokes had planned for four carved lunettes on the exterior of the chapel, above each of the 4 side doors on the north and south sides to the chapel, but only the southwest lunette, a gift from Stokes, was ever completed.[3] A semi-circular block of marble sits above each of the other three doors awaiting a donor.

The interior of the chapel, one of the prettiest on campus, features a Guastavino tiled roof and John LaFarge stained glass windows behind the altar.

High up in the drum on which the domed ceiling sits are 16 stained glass windows, each featuring the the coat of arms of prominent New York families from Columbia's past.

Located under the balcony on the south side of the chapel is the Nakashima Peace Alter, a gift of Professor and Mrs. Wm. Theodore de Bary "In Commemoration of Columbians Who Died In Service Of Their Country", and in recognition of George Nakashima's contributions to Columbia.

In the alcove on the southeast corner of the chapel (front right) is a marble basin and a small bronze plaque dedicating something (presumably the basin) in memory of Francis S. Bangs from fellow alumni.

On the south side of the choir section (right wall of the very front section) is a tablet dedicating the chapel to the donors' parents. Directly below the tablet is a small bronze plaque noting that the architect and his wife's ashes are preserved at that very spot.

The north and south transept walls feature massive stained glass windows that were donated after the buildings construction. Their place had been held by regular windows. It was originally proposed that the south window represent great teachers of the old testament and be a memorial to Dr. Samuel Johnson, and the north window represent great teachers of the new testament and be a memorial to Frederick A. P. Barnard. The windows are installed in reverse of the proposed placement. The dedications haven't been confirmed as the balconies are typically closed.

One of the more curious and overlooked feature of St. Paul's interior are the marble memorial tablets installed throughout the interior, recognizing various administrators and teachers after their deaths.

Tablets on the north side of the chapel, beginning at the main door and moving towards the choir:

Tablets on the south side of the chapel, beginning at the main door and moving towards the choir:

If there's someone you'd like to honor with such a tablet, feel free to contact facilities and get a quote since there appear to be at least two spots on the chapel wall left. The most recent plaque was installed in 1988.

The wrought iron gates outside the chapel were originally the gates to the North Dutch Church at Fulton and William Streets in Lower Manhattan, where Columbia commencement was held in the early 19th century.

The Class of 1893 Bell, located outside roughly above the left column of the front portico, was dedicated on June 5, 1918 as a 25th anniversary class gift. It rings at 9:30am on the day of University Commencement to signal the beginning of the student procession. If you enter St Paul's and turn left to the northwest staircase, you'll find the bell rope hanging from the ceiling, attached to the bell through a small hole in the ceiling. A plaque recognizing the gift was installed 10 years later on June 5, 1928.

During commencement, the church is also the location of the Baccalaureate Ceremony.

Other popular uses include concerts and, of course, religious ceremonies. It is also popular for weddings and memorial services.

St. Pauls' crypt (basement) is used by a number of student groups. The Postcrypt Coffeehouses take place in a small intimate space, and the Postcrypt Art Gallery is located in the Guastavino Room, a well lit space distinguished by its strange acoustics thanks to its vaulted Guastavino tiled ceiling. Also located in the crypt is the Choir Room a beautiful somewhat semi-circular space located under the chapel altar and with small stained glass windows. Of note in the Choir Room is a framed 1906 letter in northeast corner of the room from Randall Davidson, the Archbishop of Canterbury, expressing his best wishes and offering his blessings for the new chapel.

The Blue and White holds formal weekly meetings in the crypt, as do various student religious groups holding studies and discussions.

The mixed use of the crypt spaces led to a minor controversy in 2005 when the University Chaplain installed canvas curtains in the gallery space that could be pulled by religious groups who were using the space when tasteful nudes and blown-up genitalia were featured on the walls. This led to Postcrypt's student management crying censorship, although everyone eventually calmed down and agreed the decision was a sensible compromise in order to maximize the utility of the space.[5][6][7]

The crypt is accessible by going through the entry door on the far right and then down the stairs.

The 1996 film The Mirror has Two Faces was filmed at an organ recital at St. Paul's. The chapel's Aeolian-Skinner pipe organ is renowned for its sound.