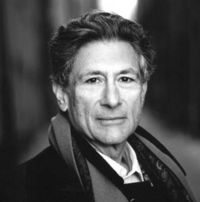 Edward Said was a longtime professor of English and Comparative Literature and University Professor. Said is notable for espousing the theory of Orientalism, which, in turn, helped to originate Postcolonialism. Chances are that you will have read an article of his in University Writing, or bumped into his work in a Major Cultures class. Either way, you will not escape Columbia without having read or pretended to read at least something by him. His nickname is "Ed Said" (with "Said" mispronounced so as to rhyme with "Ed").

Said began teaching at Columbia in 1963, and in 1977 became the Parr Professor of English and Comparative Literature. Subsequently, he was named the Old Dominion Foundation Professor in the Humanities. In 1992, he attained the rank of University Professor, Columbia's most prestigious academic position. Although he was a famed theoretical literary critic, he actively discouraged literary theory in his classes - though apparently not enough for Barack Obama, who disliked the amount of theory in a Said class he took and described the professor as "a flake".[1]

In 2000, Said was photographed throwing a rock over the border between the Palestinian territories and Israel. This caused a flurry of condemnation on campus and in the press, but Provost Alan Brinkley said the university would take no action agaist Said, and defended his action on grounds of freedom of expression.

He was the first professor to win the Lionel Trilling Book Award twice, a feat shared only with Andrew Delbanco. The Edward Said Memorial Lecture was established in his honour by the Heyman Center in 2005. A professorship endowed in his name is held by Middle East historian Rashid Khalidi.

Said's former office in Philosophy Hall has been reassigned, so tourists, please stop asking the English Department if you can sightsee in it.