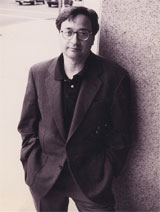 Andrew Delbanco (pronounced "Dell-BANK-o") is the Julian Clarence Levi Professor in the Humanities and the director of the American Studies Program. He's also a prominent public intellectual who publishes all over the place and was named America's "top social critic" by Time magazine. The snarky comment on this is to say that Delbanco is what Time thinks a social critic is.

A double graduate of Harvard (B.A., Ph.D.), he has also been the recipient of a Guggenheim Fellowship. He won the Lionel Trilling Award twice, for Melville and The Puritan Ordeal. Edward Said is the only other person to have won the award twice.

Delbanco has made noise regarding both (a) the diminishing place of Columbia College within Columbia University[1] and (b) online education[2]. His critiques, though well-reasoned, can easily be ignored, because books are boring and take a long time to read.

In 2012, he warned, "I believe there is today a real threat to the Core. Not sudden abolition so much as slow attrition."[3]