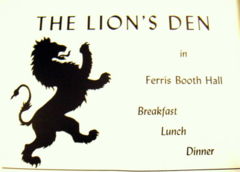 Ad for the FBH Lion's Den in a yearbook