From WikiCU
(Redirected from Levien Gym)
Jump to: navigation, search 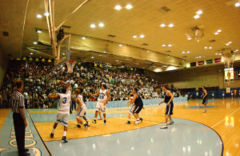 The Francis S. Levien Gymnasium, sometimes referred to as "The Levien Underground" by WKCR sportscasters, opened at the start of the 1974 season, replacing the University Gym, which continues to serve as an intramural facility. Levien draws a loud crowd in support of Men's Basketball. Women's Basketball and Volleyball games tend not to draw as large a crowd.

The gym is open for recreational basketball and other sports during times that it isn't scheduled for games, practices, classes, or other events.

Levien Gym is the site of the annual Basketball Mania season kick-off event.

In the summer of 2002, a brand new state-of-the-art floor was built that provides better spring and cushion for Columbia's student-athletes. The project, a cooperative effort between Columbia University's Department of Facility Management and its department of physical education and intercollegiate athletics, cost nearly $1 million. The improvements include a custom floor created by J.J. Curran of Connor Flooring Systems. The custom floor features 1.5-inch boards, different from the normal 2.25-inch boards. The thinner, more tightly-packed boards provide more stability for the surface.

Levien Gym also underwent a major upgrade over the summer of 2004 to improve its seating and now offers chairback seats in addition to bleacher-style seating.