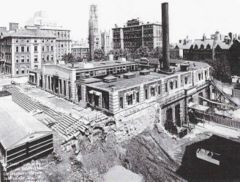 University Hall was a building behind Low Library, on the site of present-day Uris Hall. Its construction was begun in 1896, but it was never fully built. Its foundation was later used to construct Uris.

The original plans for the building called for the construction of Alumni Memorial Hall, a massive great hall to provide meeting spaces and a dining hall, and a University Theater with seating for up to 2500. The project was inspired by Harvard's Memorial Hall and would have functioned much like Yale's Bicentennial Buildings.

However, the university never focused on fundraising for the building, leaving it to Alumni to raise the funds, who in early Columbia history failed spectacularly to do so on a number of occasions. In 1900 enough funds were scraped together to only build a single story. This burned down in 1914 and had to be rebuilt.

The building as completed in 1900 featured the school's Gymnasium (now University Gym, a.k.a. the "Blue Gym" in Dodge) with a marble pool below it, a power plant (both built in 1896-1897 and still there today), and a 500 person dining hall, called University Commons, on the campus level. The room, previously used by few students, underwent major renovations in 1919, and the cavernous space was transformed. The walls were decorated with scenes from Greek vases; Verses, taken mostly from passages by Homer and Hesiod, were inscribed around them, and the rafters were decorated "so as to neutralize the impression of their unpleasant form." The renovations proved successful as the number of meals served in University Commons quadrupled by 1922.[1]

The gymnasium hosted Commencement exercises until 1926.

The building's horseshoe shape combined with the two prominent smokestacks sticking out of it from the power plant led to it being called the "Steamboat on the hill."[2]

In 1927, with Low Library being over-filled with books, the university librarian wrote a 13 page letter to President Butler proposing that the solution would be to build University Hall as a massive new library and build a connecting hall between it and Low to create a massive library with a footprint rivaling St. John the Divine. Although James Gamble Rogers produced a series of drawings and blueprints of the proposed behemoth, the massive design and costs led the University to consider other options, and Butler Library was built instead.

In 1959, the death knell for University Hall was rung when the Courtney Brown, dean of the Business School secured a donation to build a new facility for school, and received permission to use University Hall's site. The single campus level story was demolished and the construction of Uris Hall was completed by 1964.