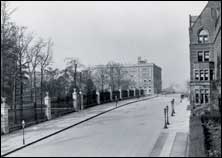 View down 120th Street. The Grove on the left, Teachers College on the right, and Milbank Hall in the distance. 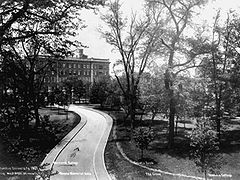 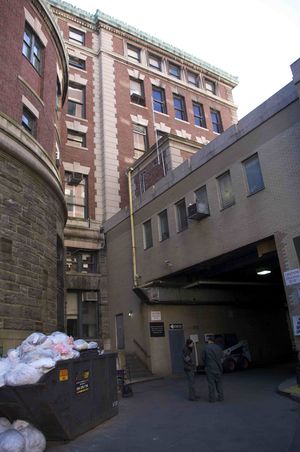 The Grove (sometimes called "The Green") was a park at the northern end of the Morningside Heights campus located at street level directly across from Teachers College. It was part of Charles McKim's original campus plan. After years of development on the site beginning with Pupin Physics Laboratories, and followed by Mudd, Dodge Fitness Center, Computer Science and Fairchild the park has ceased to exist. The last remaining fenced off patch of land at the corner of 120th St and Broadway behind Levien Gym and Pupin was excavated in March of 2007 to make way for the Northwest Science Building.

Perhaps as a crude joke, the area between Schermerhorn, Fairchild, and Mudd is still referred to as "the Grove." However rather than being a park, it is the home to six dumpsters and emits a foul odor of decay; the University's garbage can.

Prior to development, the Grove stretched from behind Havemeyer, Schermerhorn and the foundation of University Hall (now Uris Hall) all the way to 120th street.

The first proposed development of the grove came in 1898 when Seth Low commissioned the Grove Dormitories from McKim, Mead, and White. However, funds were never raised and the buildings were never built.

Eventually Wilde Observatory was constructed on the Northwest corner of the Grove, and the Great God Pan was installed in a fountain on the Northeast corner. The observatory would be demolished after being made redundant by Rutherfurd Observatory atop Pupin Physics Laboratories, and the statue of Pan would be moved to the lawn in front of Lewisohn Hall to make way for Mudd Hall.