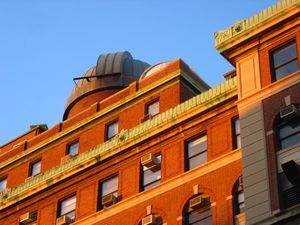 The Rutherfurd Observatory is the astronomy observatory atop of Pupin Physics Laboratories. It is named after Lewis Morris Rutherfurd, an astronomer and trustee from 1858 to 1884. It effectively replaced Wilde Observatory.

The Astronomy Department hosts periodic "Open Nights" during the school year when the roof-top observatory is open to the public to view the stars.[1]

Since the construction of the Northwest Science Building, the observatory has been partially blocked causing the university to look into putting one atop a different building.