From WikiCU
(Redirected from Havemeyer)
Jump to: navigation, search 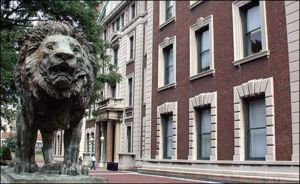 Havemeyer Hall, with the Scholar's Lion 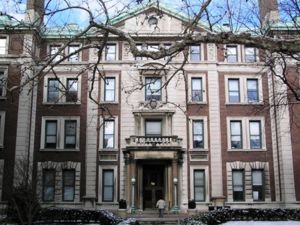 Havemeyer Hall is the home of the Chemistry Department. It was the vision of chemist Charles Frederick Chandler, and was funded by his friend Theodore Havemeyer (School of Mines Class of 1868) in honor of his father, Frederick Christian Havemeyer CC 1825. The latter's cousin, William Frederick Havemeyer CC 1823, served as Mayor of New York three times over the course of the 19th century. The prominent family made its fortune in the sugar industry. The building was built in 1897 to a design by McKim, Mead, and White. Its cornerstone is filled with all sorts of documents and items.[1]

Research done here has led to seven Nobel Prizes. The first was awarded in 1934 to Harold Clayton Urey, whose research in Havemeyer led to the discovery of deuterium in 1931. Urey's old office (622) is occupied by Professor Louis E. Brus, the Samuel Latham Mitchell Professor of Chemistry and Professor of Chemical Engineering.

Room 309, a huge lecture hall that is the building's centerpiece, is famous for being featured in a number of films.

Havemeyer's exterior makes an appearance in the opening scenes of Ghostbusters, with a plaque identifying it as the fictitious "Weaver Hall", home of the Department of Psychology where Dr. Peter Venkman's office is located. Columbia's Psych department is actually located in Schermerhorn Hall.

The east end of Haveyemer's main corridor was once devoted to Chandler's Chemical Museum, which held every inorganic salt known at the time and a collection of more than 4000 organic compounds, 1000 of them first developed in Columbia laboratories, as well as vegetable, petroleum and essential oils; explosives dating back to the Civil War; tanning and fertilizer exhibits; resins, varnishes, and pigments; a comprehensive electrochemical exhibit; colloids; a collection showing the history of ceramic arts; a set of early-19th century apothecary jars; a collection of the earliest photographs; and an exhibit of "rare earths". There was also a set of pre-World War I German dyes. The Chandler Museum collection was the only one available for use by the U.S. government for standards after German dye patents were confiscated during the war. Much of the content of the museum survives, though only a small portion is on display in Havemeyer's corridors.

Havemeyer is connected to Chandler Hall from which one can gain access to the tunnels (specifically, the Old Powerplant tunnel system). Connected to Mathematics Hall, but the door is locked from one side.