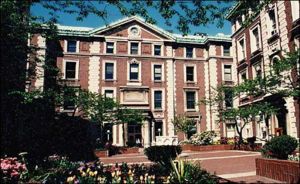 Schermerhorn Hall (pronounced sker-mer-horn) is a building on the Morningside Heights campus housing a mix of departments.

Schermerhorn was built in 1897 to a design by McKim, Mead, and White to house the "natural sciences." An inscription above the doorway reads "For the advancement of natural science. Speak to the earth and it shall teach thee."

The building was a gift of William C. Schermerhorn, Columbia College Class of 1840.[1] The chairman of the trustees at the time and an enthusiast for Columbia's move to Morningside Heights, he offered $300,000 for a building of whatever purpose the university saw fit.[2]

Thomas Hunt Morgan conducted his Drosophila experiment in his Schermerhorn "Fly Room" in 1900, leading to his Nobel Prize in Medicine, the first for genetics. During the Second World War, some initial Manhattan Project research occurred here, though most of Columbia's efforts on the project were concentrated in Pupin Hall.

Today Schermerhorn is home to the following departments and organisations:

Directly behind and connected to Schermerhorn and is Schermerhorn Extension. The easiest way to get to a room in the extension is to enter Schermerhorn, make a right, walk until the end of the hallway, make a left, go all the way forward and down a few stairs and make a right, then another left. You're now in the Extension. On your right are a bank of elevators that will get you to the rest of the floors. Alternatively, enter the service gate on 118th St and Amsterdam Ave during the daytime and use the door immediately on the left if it's still open.

Also, your chances of finding a bathroom here are as high as the chances of Barack Obama speaking at campus.

If the above instructions were too complicated to read, let alone follow, you're best off not majoring in one of the subjects listed above.