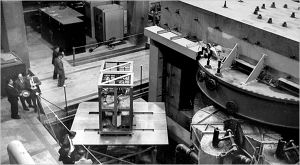 The Manhattan Project was the US attempt to construct a nuclear weapon during World War II. As its name suggests (it is not a code word), the project originated in Manhattan, and some of the initial research took place in Pupin and Schermerhorn Halls. This research centered on efforts to first split the atom, and involved some initial cyclotron and reactor designs. One of the old cyclotrons resided in Pupin's basement until as late as 2008. Between 2008 and 2010 it was removed to make way for new pipes necessary for the construction of the Northwest Corner Building.

Columbia physicists also worked on a project to convert uranium into fuel for bombs by concentrating the easily splittable, but rare, 235 isotope of the element.

700 people were employed on the project at Columbia in its peak years. The football team was among them, enlisted to carry uranium across campus, meaning it was once useful for something, at least.