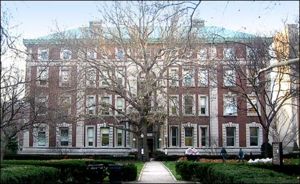 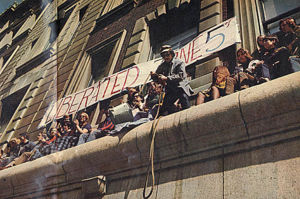 Mathematics Hall was dubbed "Liberated Zone No. 5" by students who occupied it during the 1968 protests

Mathematics Hall is home of the Mathematics Department. Math Hall formerly housed the School of Engineering, but SEAS decamped for more spacious quarters when Mudd was built in 1959. Unfortunately, nobody wanted to give the millions of dollars necessary to rename it to something other than "Mathematics Hall".

On the Broadway side, a plaque on the building commemorates the Revolutionary War Battle of Harlem Heights, which was fought in the area.

Years later, the hall was the scene of another battle - during the 1968 protests, it held the most radical student occupiers, who rechristened it "Liberated Zone #5".

People have believed that the giant tree out front is on the verge of death for a long time. They have all been wrong. The tree endures! Rumor has it that General Washington commanded his troops while standing under the tree.