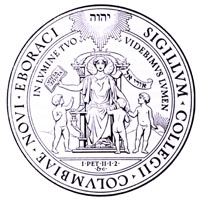 The Columbia College Seal, used by the University

The Seal of Columbia University is the most official symbol of the university since it carries legal weight. It's used by the trustees to place their official approval or stamp on something, e.g. it figures prominently on your diplomas.

Use of the Seal around campus

You can find the seal in a number of places around campus. A large seal is embedded in the floor of Low Library at the entrance of the Rotunda, and a detailed wood carving of the seal is above to the door to PrezBo's office. The seal can be seen above the stage of the Earl Hall auditorium. Three versions of the seal can be seen above the entrance of Butler Library. Directly above the door is an image of the seal. To the left is a seal with the inscription "Colegii Reg" - King's College. To the right is the same seal with the inscription Universitas Status - State University, making reference to Columbia's brief tenure in the 1780's as New York's flagship public school. Inside Butler you can find the seal on the third floor, plastered into the ceiling above the circulation desk with a chandelier hanging from it. A set of three seals similar to those above Butler's door are carved above the doors of Hamilton Hall. Additionally, any official documents from the Registrar, such as transcripts, have a heat sensitive image of the seal on it, serving as the legal signature of a university official. A nod to the seal is incorporated into the back of Alma Mater's chair. Most curiously, you can find the central image of the seal on the 116th Street subway station platform walls.

Until 2004, the seal, rather than the crown, was the university's logo on the Columbia Website. Traces of this usage can be seen on older web pages, such as Courseworks. Since then Columbia has used the crown on the home page. It is possible that the University is consciously asserting greater control over where the seal is used since it carries legal weight.

The seal was designed by President Samuel Johnson and approved by the Governors of King's College on June 3, 1755.[1] According to Johnson's original description, the college is represented by a lady sitting on a throne, with several children (her pupils) at her knees. Beneath them is a reference to 1 Peter 2.1-2, expressing the way in which the children should recieve instruction: "laying aside all malice and guile and as new-born babes, desire the sincere milk of the Word, that ye may grow thereby." The lady has her left hand on one child and holds open a bible in her right hand, and the words LOGIA ZONTA, an allusion to St. Stephen's words in Acts 7:38 meaning roughly "the Living Word" (or in Johnson's time the "Lively Oracles") are written in Greek. The hebrew Tetragrammaton, YHVW (Jehovah), appears within a radiant triangle. The school's motto "In Lumine Tuo Videbimus Lumen", meaning "In thy light we shall see light" Psalms 36:9, arcs across the top. Out of the ladies mouth is a label with the words "Auri Al", "God is my Light", alluding to Psalms 27:1 ("The Lord is my light and my salvation"). In the background is a rising sun, alluding to Malachi 4:2, a prophecy of Christ that "The Sun of Righteousness shall arise with healing in his wings." Lastly, all this is surrounded by the latin text Sigillum Collegii Columbia Novi Eboraci, "Seal of Columbia College, New York."[2][3][4]