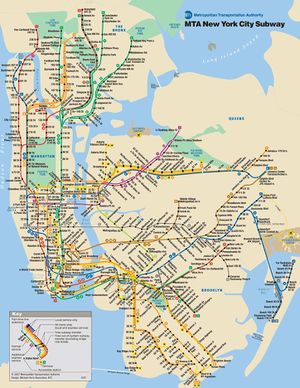 The New York City Subway was designed by Columbia-educated engineer William Barclay Parsons in the 19th century, and looks as if it hasn't been upgraded much since. Still, it's the easiest and most economical means for getting around NYC should you be one of the brave souls who dare venture beyond Morningside Heights. The current base fare is $2.75 per ride. (Don't complain since in London the base fare is £4, or $8.) MetroCards are required for entry and can be purchased with cash, credit, and debit cards at any station.

Occasionally, the subway stops running between 96th Street and 137th Street. It sucks when this happens.