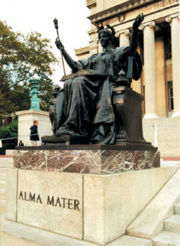 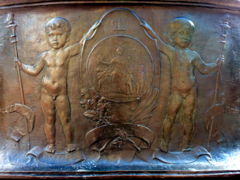 The design stamped on the back of Alma Mater's chair

Alma Mater is literally the mother soul of the college/university. In the context of Columbia, Alma Mater almost always means the Daniel Chester French sculpture that graces the steps to Low Library.

Alma Mater was originally intended to be gilded, but never was. The bronze eventually oxidized and the statue was instead coated and sealed.

Rumor has it that back-up Alma Maters are kept at the ready should need arise.

An owl is hidden in the folds of Alma Mater's robes. According to legend, the first student of each College class to find the owl would graduate Valedictorian and marry a Barnard woman (back when Columbia College was still all-male.)

On the back of Alma Mater's chair you'll find the Columbia Crown and Columbia Seal lightly embossed in the metal.

Alma Mater was bombed in the spring of 1970. The New York Times of May 15, 1970 reports that "a bomb partially damaged the statue of Alma Mater at Columbia University" and "tore a hole in the side of the statue."[1]

In fall of 1984, Alma Mater's crown-topped scepter was stolen.[2] Weeks later it was left with an anonymous note at the doorstep of David Drinkwater, Cornell's dean of students.[3] It's unclear whether this heinous crime was perpetuated by Cornell students, or someone trying to frame Cornell. Nevertheless, shortly after the scepter's return, the statue of Ezra Cornell found itself doused in light blue paint. [4]

In the United States, an "Alma mater" is also the school song. Columbia University's is "Stand, Columbia", and the College's is "Sans Souci".