From WikiCU
(Redirected from Cornell)
Jump to: navigation, search 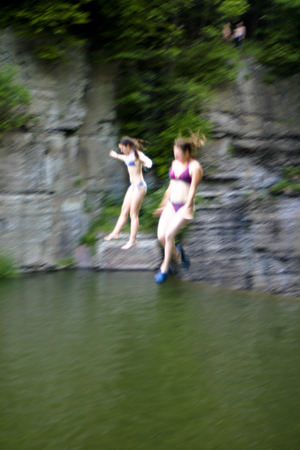 Cornell is widely known for being filled with Columbia rejects, for having a SUNY agriculture school, and for - even more incredibly - supporting a hotel management school. It was recently discovered that they even have an "Interior Design" major. And that's not even in the Hotel School. Granted, their "marketing and tourism" faculty do some groundbreaking research.

Cornell students are often noted for their insistence on reminding everyone that they went to an Ivy League school. For example, when alumni from each of the eight Ivy League schools were asked where they attended college, they responded:

Needless to say, Cornell students and alumni are extremely self-conscious of their position at the bottom rung of the Ivy League ladder, and thus carry an enormous inferiority complex around with them. Indeed, Cornell's official motto[3], coined by one of its most esteemed alumni, Andy Bernard, reads: "I went to Cornell. Heard of it?"

Observing Cornell fans at Columbia sporting events (disgusting gloating when they win, vociferous bitching when they lose) will reveal that they possess the greatest inferiority complex to Columbia out of all the Ivies. The little-guy mentality also manifests itself in their decidedly fascist marching band, which can only be understood as another failed attempt by Cornell to rise above her smaller, brighter cousins.

Cornell students and alumni are legendary for fighting prolonged and unwinnable editing wars over this very page here on WikiCU. They've never won any victories here, and in response they've produced their own wiki, which, needless to say, is pretty pathetic.

As a mark of their rage over Cornell's status, the university's students also tend to don "Ithaca Is Gorges" shirts. These reflect pride in the university's dramatic rate of picturesque suicides, in which it once rivaled NYU. Recently, the suicide rate has come down a bit. However, this only occurred after the Cornell administration established a totalitarian state in which all student movements are watched and dissenters are sent to labor camps in Alaska.[4] You can't drown yourself in ice (but you can try, as many Cornell students doubtless do during Upstate NY's unbearable winters). Even the most draconian attempts to dissuade Cornellians from ending their existence have sometimes failed, however, such that the university was forced to install barriers to prevent its students from hurling themselves into the abyss.[5]