Columbia is short for Columbia University. Variously, it may also be shorthand for any of the constituent schools of the university. It is also used colloquially by Columbia affiliates to refer to more or less the entire neighborhood of Morningside Heights.

Unfortunately, there are lots and lots of other usages of the word Columbia, including other Columbia Colleges, companies, and cities. 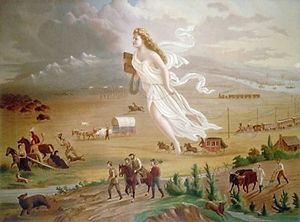 Columbia leading white settlers to, among other things, Manifest Destiny and the extinction of the buffalo. 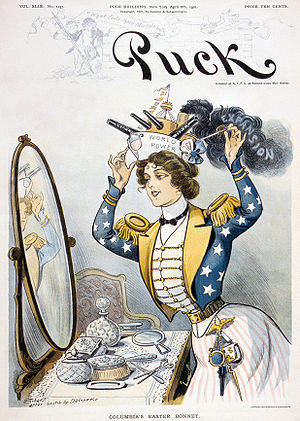 Columbia proudly dons a hat labeled "World Power" after American victory in the Spanish-American war. The artillery barrels are labeled "Army" and "Navy"

Columbia, originally derived from Christopher Columbus' last name, is a poetic name for America, much the same way Britannia represents England and Gallia, France. Historically, Columbia is the feminine personification of the United States, and she often appears when the artist wishes to depict the more graceful and noble aspects of the nation (or what appear, years later, its most jingoistic).