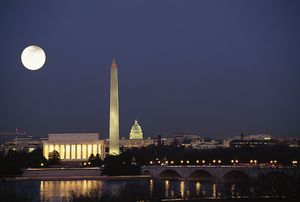 Washington, DC is the de jure capital of the United States. This sad state of affairs came about when some why Southerners staged a fit, causing the seat of government being relocated from congenial New York City to a filthy swamp on the Virginia-Maryland border. This sweaty, rotting stew has served as the physical (and, apparently, moral) foundation for the US government ever since.

Washington is not so much a city as a collection of pompous monuments surrounded by blocks of bland, IAB-like office parks, which are, in turn, surrounded by crack dens. If the layout of its vaunted "Mall" looks familiar, it's because Charles McKim of Columbia campus designers McKim, Mead, and White was on its planning committee.

It does not lie in a state, but rather a federal territory with the gumption to call itself the District of Columbia. It is forgiven for doing so only because it was given its name during the same orgiastic renaming phenomenon that bestowed Columbia College its own moniker - and because the name "District of Yale" would have sucked far more.

DC, as the locals call it, has made some marginal improvements since a Columbia graduate began to reign over things.