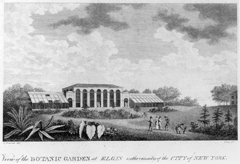 An etching of the Elgin Botanic Garden in 1806

The Upper Estate was a piece of property given to Columbia in 1814 by the State of New York in lieu of cash support (which it had given to other New York Colleges), better known today as Rockefeller Center. Generally considered at the time to be a lousy bit of property that cost more to maintain than it generated in rent, it went on to become the cornerstone of Columbia's endowment when the city's central business district relocated to midtown. In a twist of fate, Rockefeller Center is currently owned by a Columbia alumnus.

The Upper Estate should not be confused with Columbia's Midtown campus, which was located a block to the east. It was called the Upper Estate to distinguish it from the Lower Estate, the five acre property in downtown Manhattan that served as Columbia's first permanent campus.

The property that would eventually come into Columbia's possession and become Rockefeller Center first began as a botanical garden owned by a Columbia professor of Medicine, David Hosack. Hosack purchased 20 acres 3.5 miles north of any settled part of Manhattan, which encompassed what is today the land bound by Fifth and Sixth Avenues between 47th and 51st Streets. Hosack built the Elgin Botanical Garden, named after his father's birthplace in Scotland, and would hold a strawberry festival there at the end of each spring term in order to show his students the practical applications of their study of botany at a theoretical level. Neverthless, Hosack sold the property to the State in 1811 for 25,000 dollars.

In 1814 New York State deeded the property to Columbia by act of legislature, but the move was meant to be a backhanded gesture. In the early eighteen hundreds the state government lavished resources on newly opened upstate colleges such as Union College and Hamilton College while giving Columbia the cold shoulder. In 1814 the state made a cash grant of $200,000 to Union College, and $40,000 to Hamilton College. Columbia received nothing. As a consolation prize, the state legislature gave Columbia Hosack's now-overgrown garden, valued at $10,000. To add insult to injury, the state barred Columbia from developing the property commercially, stating that it could only be used as a location for a new campus. In 1819, Gov. DeWitt Clinton took pity on his Alma Mater and orchestrated the elimination of the restrictive covenant and a grant of $10,000 to make up for the worthlessness of the property.[1]

In the mid-nineteenth century, the Upper Estate went from being a white elephant to the heart of Columbia's endowment. This change resulted from the line of habitation on Manhattan Island finally reaching and passing the property, making it commercially valuable.

When Columbia decided to move from its downtown Park Place campus, the trustees briefly considered moving onto the Upper Estate, as the state had originally demanded. However, they scored a bargain on a near-by property and moved there instead. As a result, they sold the land under the downtown campus, and used part of the tidy profit they had earned in the process to improve the old Botanical Garden and divide it up into lots for rent. Four decades after it was originally granted, the land had ripened into a financial windfall.

In 1902, Columbia needed cash to purchase South Field, the land adjacent to its new, but already crowded, Morningside Heights campus. Unable to raise to necessary funds through alumni and other benefactors, the school sold off the southernmost block of the Upper Estate in order to close the deal uptown.

Eventually Rockefeller Center would be built on the entire site. The rent paid by the Rockefeller family on the site made up a tremendous bulk of Columbia's operating budget for years.

After selling the property to the Rockefellers in 1985, the property has in a way come full circle. Tishman-Speyer, co-owned by real estate developer and manager Jerry Speyer CC ’62 B ’64, bought the property in 2001.