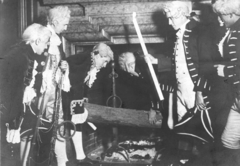 The Yule Log Ceremony is one of Columbia's oldest traditions. Taking inspiration from a similar event early in Columbia's history, when it was still known as King's College, then-president Nicholas Murray Butler began the event in 1910 for students unable to return home for the holidays.

The ceremony begins immediately after the much more recently conceived Tree Lighting Ceremony. A Yule Log is carried around campus by students dressed in Colonial costumes, and eventually arrives in John Jay Hall. The John Jay lounge fireplace is lit, and then some readings are recited: