From WikiCU
(Redirected from CEPSR)
Jump to: navigation, search 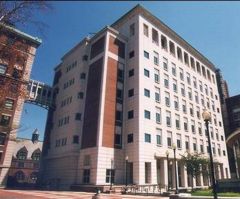 The Schapiro Center for Engineering and Physical Science Research (CEPSR) is a recently built research facility located between Pupin Hall and Mudd Hall, both of which are connected to CEPSR via skybridges. The building is often just called CEPSR (pronounced Sep-sir) to avoid confusion with Morris A. Schapiro Hall, an undergraduate dormitory. It is located at 530 West 120th Street.

The site was originally occupied by the Pegram Laboratory, built in 1955. Schapiro replaced it in the 90s with funds provided by Morris Schapiro, and built in a postmodern style with a heavily neotraditional bent. In fact, it is the most explicit attempt to replicate McKim, Mead, and White's original campus architecture since the construction of Butler Library in the 1930s. The American Institute of Architects are less enthusiastic, however, calling the building [p]ostmodernism with a heavy hand. Neither historicist nor modernist, it fails to subdue its bulk gracefully, its monumental top floor and colonnade giving it a monumental stance".[1]

Floors 4, 6, 7, 8, 9 and 10 contain offices and laboratories. The 10th floor houses a Clean Room which is used by researchers from many disciplines. The second floor has access to the 120th Street loading dock and Pupin. The elevator and floor configuration confuses many visitors; the main fourth floor (campus-level) lobby has three elevators that service floors 4-10 and one freight elevator that services floors 1-11. A second fourth floor lobby has a single elevator between floors 2 (120th Street entrance) and 4 (campus-level lobby).