From WikiCU
(Redirected from COOP)
Jump to: navigation, search 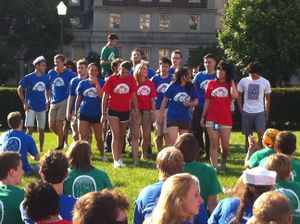 The Columbia Outdoor Orientation Program (COÖP) is a pre-orientation program for first year students in Columbia College and SEAS. It is geared towards those students that are interested in a non-traditional orientation program and enjoy the outdoors. COOP has since 1983 "creat[ed] an environment you won't get at Freshman Orientation"[1].

The program is divided into:

COOP began in 1983 "to help ease the transition to coeducation"[2]. At first only a hiking trip (now known as COHOP), the program added a biking trip (now COBOP) in 1996[3]. Several years ago, a third branch was introduced, COROP, that one for rafting/canoing. Plans for a fourth program, COFOP—Columbia Outdoor Farming Orientation Program—were drawn up and subsequently scuttled.

Participants of the outdoors program tend to develop an attachment to one another that lasts throughout their undergraduate experience, or at least NSOP week. By the time the vast majority of students are only just moving in, meeting people, and getting over their anxiety about coming to college, COOP participants have already spent a week or so sleeping together in tents and chilling around campfires.

It is wonderful way to begin your time at Columbia, get to know a group from the entering class, and get out into the woods. It is also kind of a cult. No amorous conduct is allowed on COOP trips. As the saying goes, "Our love is intense, but not in our tents."

At a 2011 SGA meeting, the SGA discussed bringing COOP to Barnard College, to surprise of COOP coordinators and dismay of commenters[4]. It is unlikely that Barnard students will be added to COOP, on account of the requisite 1:1 male to female ration.

COBOP coordinator Sarah Dion had this to say of the program, “I can point to the person in COÖP who was like, ‘This is the thing I was involved in, this is really cool, you should check it out' " [5].

COOP is much loved by current leaders, and attracts almost half of the participants each year to apply to be a leader the following year.

If you enjoyed your trip when you were a first-year, or if you just want to brave the outdoors, you can follow the steps below to apply to become a COÖP leader:

From the COÖP mission statement[1]:

The Columbia University Outdoor Orientation Program (COÖP) is an optional pre-orientation program for incoming first-year students entering Columbia College and the Fu Foundation School of Engineering and Applied Science. COÖP is designed to ease the anxieties of transitioning into the college environment through a four-day outdoor camping experience. The COÖP experience is divided into three trips, biking, hiking, and river, each of which pairs a small group of first-years with several upperclassmen trip leaders. The leaders act as mentors for the first-years, ensure safety on the trip, and create a comfortable environment in which first-years can ask questions, express concerns, and get to know one another.

Although all people who do COOP can unite together in looking upon the rest of their classmates as if they missed out on a wonderful bonding experience, there are friendly internal scuffles regarding which program is the "best."

Generally, it's considered that BOP is the hardest physically, but the least traditional of the three programs. This is on account of getting generally closer to civilization as the week goes on and having water on tap at all times. The massive amount of biking makes up for this, however.

HOP is considered the most traditional, and is the original of the three programs. It's not as strenuous as BOP, but still leagues ahead of ROP. This is mixed with the possibility of running out of water (which does happen during dry summers). It has the best views, the smallest groups, and a wonderful visit to Phoenicia, with its traditional eatery and general goods store (where you can buy the iconic Catskill Mountains hat).

ROP is considered the most easygoing and fun. It's barely strenuous at all, and there's no possibility of running out of water—by definition. It has the largest single groups, but there's barely any consistent physical activity. It's mostly fun and games, compared to miles of walking or biking.