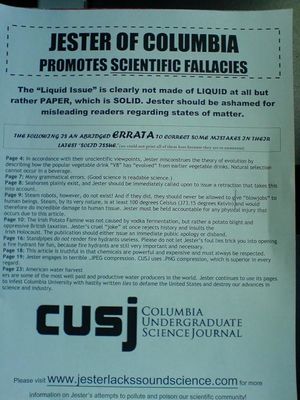 CUSJ's manifesto that appeared on the redistributed Jester copies

The CUSJ-Jester Feud refers to a bizarre conflict that started in Spring 2007 between the Jester, a campus humor magazine, and the Columbia Undergraduate Science Journal. The feud initially played out in the comments pages of the Bwog, wherein commenters claiming to be members of the respective organizations posted angry, insulting, and occasionally threatening messages about the other publication[1]. The root cause of the fight is not known by the public at large. Given that Jester is a humor publication and is the only party to actually claim responsibility for its alleged actions in the feud, it is widely believed that the feud is a hoax contrived by Jester for publicity.

The fight escalated when members of the CUSJ allegedly altered the Jester Wikipedia enrty[2]. The edits claimed that the group promoted "lackluster understanding of particle physics, frequent misrepresentations of string theory, and fervent hatred toward America." Jester was also added to the group of internationally recognized terrorist organizations. This vandalism was covered on the Bwog[3].

In rebuttal, Jester writers allegedly edited their Wikipedia page to claim that they have a "brilliant understanding of particle physics," make frequently correct representations of string theory, and mount a "fervent defense of America against the Columbia Undergraduate Science Journal." Jester supposedly likes to mock CUSJ for taking a 1906 piece in the Jester about the non-existence of the ether seriously.citation needed 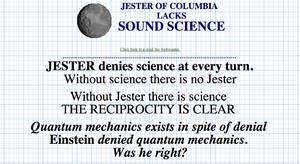 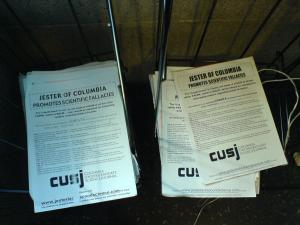 The Jester issues, with the CUSJ addendum.

On April 7, 2007, members of Jester tipped off Bwog that 700 copies of their latest magazine's issue were stolen from the SGO.[4] Two days later, the Spectator picked up the story including a statement from Jester editor, Alex Weinberg, saying that Jester had no intention of reprinting the missing issues, nor of making an official complaint to Public Safety.[5]

The same day that the Spectator article was published, the missing copies were found throughout campus buildings with an addendum stapled to the front containing a partial list of factual errors contained in the issue, as well as a link to a bizarre Web site called Jester Lacks Sound Science (Dead link) that contained schizophrenic allegations against Jester, purportedly created by CUSJ.[6] Commenters on Bwog pointed out that the Web site bore an obvious resemblance to the equally bizarre and confusing Web site, Time Cube.

Following the reappearance of the lost issues, Jester editors Alex Weinberg and Sam West continued to suggest that CUSJ was responsible for the theft, but justified their decision not to press official charges saying, "Justice cannot wait several weeks for bureaucratic approval."[7]

Editor in Chief of the CUSJ, Gabriel Morris, denied any CUSJ's involvement in the incident and suggested that the stunt was entirely contrived by Jester in a prank taken a step too far. He told Spec, "We had nothing to do with this. These are serious accusations, and they're punishable by established practices within student group guidelines proscribed by SDA, and we hope that we can move on beyond this," which just makes it funnier[8].